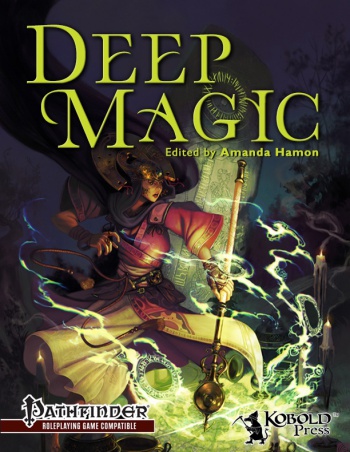 Senior Editor Jon Bolding says: In a year filled with tons of short, sweet supplements that allow for hours of gaming in a new world or with a new suite of classes, it's strange that we'd pick the titanic tome that is Deep Magic, but that's because there was really no other choice. Where on the surface you might mistake Deep Magic for a game book from the early 2000s, a "What a value!" hackjob stuffed with content because the authors could do it, not because it's all good, this is actually just a bound collection of some of the most clever magical house rules and subsystems we've ever seen. With a laundry list of clever designers and storytellers - from Kobold Press' own Wolfgang Baur to Ed Greenwood and Jason Buhlman - spinning out Pathfinder mechanics and spells from the bizarre to the brilliant. This is, in effect, hundreds of pages of short, sweet supplements. Any one of the subsystems in this book could make a campaign unique, and adding all of them would turn an established campaign on its head.

Fantasy game players are too used to knowing precisely what spells are. "Oh," says your fighter, "he's casting sleep probably." Well, no, actually, he's not. Because you've got Deep Magic and that guy summons angels and bad luck. From homunculi and myths to runes and blood, there's not much to hate in here. Players will find unique hooks aplenty for characters, and DMs will find fascinating inspiration for villains. While other supplements this year fleshed out their campaign world or offered a new one to splash around in, Deep Magic added value to every fantasy campaign you've ever played - whether in Pathfinder or 13th Age. If you're in either of those systems, this is a can't-miss book.

Next up, Best Single Comic Book Issue of 2014. Click here!