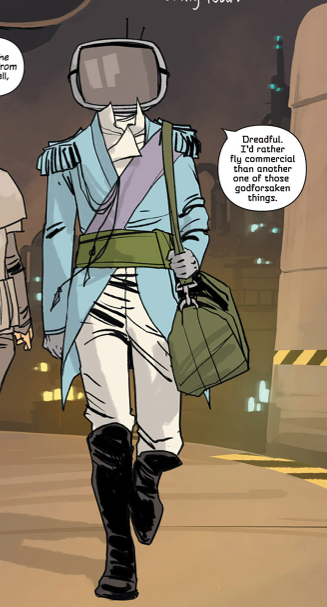 Senior Editor Ross Lincoln says: Ho-hum, another decade, another example of how incredible Brian K. Vaughan is. His Y: The Last Man is rightly regarded as an all-time classic, but at the end of his career, Saga is probably going to be seen as his magnum opus.

Like a cross between Star Wars, Heavy Metal and Dragon Riders of Pern, Saga takes place in a universe with galaxy-spanning societies currently torn up by a war between magic-users and tech-users. The central characters are two former soldiers from the opposing sides who fall in love and run off together. Joined by members of their extended family (and their baby), they're being chased all over the galaxy by former commanders, by bounty hunters, and by the members of a royal family comprised of Robots who have CRT monitors for heads.

Vaughan's writing displays particular maturity here. Clearly affected by his television work, he manages to blend cinematic conventions with comic book conventions in a way that feels almost effortless, while also crafting believable characters and a touching romance. Profane, sexy (and explicit), heartwarming and thrilling, Saga is one of the greatest space operas ever conceived.