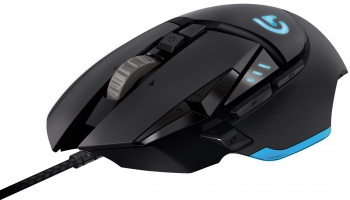 Senior Editor C.J. Miozzi says: Logitech has been one of the leading names in gaming mice for years, but the tech company has really outdone itself with the G502 Proteus Core. Priced competitively with other gaming mice, the Proteus Core edges out its competition by offering more features, greater customizability, and more versatility across different genres of gaming.

While I personally don't need more than three buttons on a mouse, a lot of gamers make great use of them - and some MMO gamers can't get enough buttons. From executing macro commands to simply reallocating key presses from your keyboard to your mouse, gamers continue to find increasing value in additional mouse buttons. With 11 buttons, the Proteus Core offers more than most gaming mice without getting into the "seriously overboard" territory that some MMO-mice lean toward - at least, from a non-MMO gamer's perspective.

There's even a twelfth button that allows you to switch the mouse's scroll wheel from slick and fast free-scrolling to highly-tactile stepped-scrolling. No more having to decide between a mouse that features one or the other - we now have the technology to please everyone.

The Proteus Core's optical sensor offers up to 12,000 DPI, which is more than its competition and more than most gamers currently need. But with 4K gaming on the horizon, you can call this "future-proofing" rather than "overkill." And before you scoff at that optical sensor - you know, for not being a laser sensor, despite some pro FPS players swearing by optical - know that Logitech implemented a feature that allows you to calibrate the sensor to your specific gaming surface through its software for optimum performance. This software also allows you to store three profiles on the mouse itself and many more on your computer. Profiles for specific games will automatically load when the game does, allowing you to execute programmable macros and in-game commands via mouse click.

The mouse itself is on the smaller-size, best suited for claw- and finger-grip gamers than palm-grip gamers. As for its weight, this is one of the most tunable mice out there. The feel of a mouse is very important to a competitive gamer, and the Proteus Core has a weight and balance system that allows you to adjust not only how heavy the mouse is, but also its center of mass.

If there's one mouse released this year that is most likely to please everyone, it's the Proteus Core.

Note: To qualify for this award, the product must have initially released in 2014, or had a new version release in 2014.