Read more about the nominees here 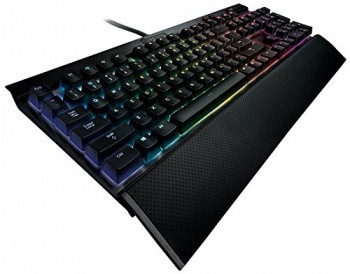 Senior Editor C.J. Miozzi says: When it comes to keyboards, 2014 is the year of 16.8 million color illumination and custom mechanical switches. With the expiration of the Cherry MX patents, the door has been opened for everyone to manufacture and distribute their own mechanical switches, and Razer and Logitech are two giants that took a stab at it with their new keyboards. Feedback has been mixed as to whether they are superior to the time-tested Cherry MX that we've grown accustomed to, and I look forward to seeing how these companies iterate on their switch designs in the years to come.

Meanwhile, Corsair has kept with Cherry MX, and the Vengeance K70 RGB is an exceptional example of the current leading tech in gaming keyboards. Available in your choice of Cherry MX red, brown, or blue switches, the Vengeance gives you options: do you want more resistance and clackety-clack (blue), less (red), or somewhere in the middle (brown)? A detachable wrist rest covered in soft plastic is there for those who want it, but if you don't have the desktop real estate or you don't like the feel of it, then it comes right off.

All mechanical keyboards cost more than traditional membrane keyboards, and while it may be a hard sell to someone who has never owned a mechanical keyboard, they simply feel better to type with. Plus, they're built sturdier, they'll last longer, and you'll never lose a keystroke input when hitting multiple keys at once.

The K70 RGB's software allows you to create custom profiles, record macros, and reassign keys. It lacks dedicated macro keys, but this allows the keyboard to have a smaller footprint on your desk, and outside of serious MMO gaming, dedicated macro keys often just collect dust.

But the K70 RGB's flashiest feature is, well, the RGB. Using the software, you can customize the lighting of individual keys, and beyond "simply" changing the colors, you can program in all manner of complex behaviors. Some are just razzle dazzle, like the ripple effect that sets of "wave" of changing color emanating from the key you pressed across the entire keyboard, but I'm sure clever gamers can find tremendous use in others, such as the ability to cycle colors on a key every time it is pressed. Imagine how useful it can be, when learning a new game, to have important hotkeys highlighted in particular colors on your keyboard. Imagine color-coding your MMO ability hotkeys: green for healing spells, red for attacks, and blue for buffs. Imagine no longer having to fumble about to reorient your finger position if your hand slips and you start hitting the wrong keys - from the periphery of your vision, you can spot the color-coded keys to rest your fingertips on.

In the past, I've considered lighting an aesthetic bonus feature on a keyboard, but certainly not something that is worth driving up the keyboard's cost significantly. But we are now entering an era in which keyboard illumination can actually positively impact your gameplay in ways we never imagined. The K70 RGB costs a pretty penny, but it wins this year's best gaming keyboard award for being one of the best-made keyboards that is expanding the boundaries of the tech with no wasted features and plenty of options.

Note: To qualify for this award, the product must have initially released in 2014, or had a new version release in 2014.

Next up, Most Significant Breakthrough in Science & Technology of 2014. Click here!