And the Escapist Award goes to: 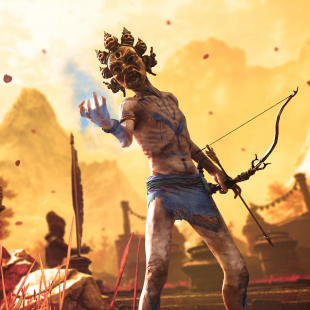 Developed by Ubisoft Montreal
Published by Ubisoft
Released on November 18, 2014
Available on PC, PS3, PS4, Xbox 360 and Xbox One
Far Cry 4 - Xbox One

Editor in Chief Greg Tito says: For many players, the first person shooter is the quintessential game format. From its roots in games like the original Wolfenstein and Doom, to the multiplayer in GoldenEye, TF2 and Call of Duty, the impact shooters have had on game development is huge. This year alone, big-time publishers aimed their sights on the waning Call of Duty audience with robots, spaceships, and Kevin Spacey. All they were missing was a honey badger.

Ubisoft built on the success of Far Cry 3 to give players an open world in a unique setting. Kyrat may be a Nepalese stand-in, but the mountainous country was ripe for exploring new places to shoot things. Far Cry 4 looks absolutely stunning on new consoles, and offers a wonderful sandbox in which to wreak all kinds of havoc. Want to set loose a bear to take out guards? Yeah, that's cool. Trying to stealth into an outpost only to be discovered by a pesky eagle ripping your eyes out from above? It happens. Want to storm a group of Pagan Min's troops with a only a grenade launcher and a prayer? Bold. The beauty of Far Cry 4 is allowing you to accomplish things in the world however you want.

Speaking of Pagan Min, the deliciously detestable villain was brought to life by the incomparable Tory Baker. In many ways, Far Cry 4 tells the story of the dictator through his relationship to the protagonist's parents and Ajay himself. It's almost as if Min wants us to kill him, and the curious way your path intersects with him through the game acts as a skeleton to all the shooting shenanigans.

As columnist Robert Rath asserts, Ubisoft recreated a lot of what the Himalayan nation of Nepal feels like while missing the mark on a lot of cultural touchstones. But if nothing else, Far Cry 4 lets those of us who don't travel internationally very often a chance to play in a new part of the world.

But above all, Far Cry 4 is a shooter that understands interesting situations are better served a la carte than on rails, and for that it earns the Escapist Award for the Best Shooter of 2014.