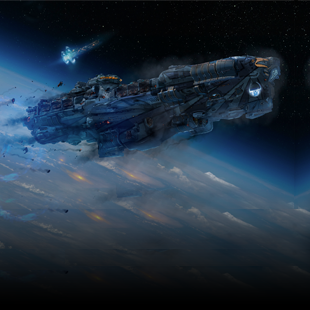 Developed by Yager. Published by Grey Box. Currently in alpha and tentatively scheduled for release in 2015 on PC.

Since warping into the planet's atmosphere, the battle has not been going our way. Watching our ships fall from the clouds, littering the sky with depressive fireworks composed of our brethren, I know something needs to change, and quickly. Channeling my inner Adama, I direct full power to the engines, fly out from behind the cover of our dreadnought, and dash ahead across their line of sight, drawing fire. I realize my shields are down, but I just need to make it to the mountain peak ahead. I take a hit right before the ridge, but still make it through, and their ships have pivoted towards the deliberately open target, giving my teammates time to advance and re-position. Capital ships don't just turn on a dime, you know.

Piloting a Corvette-class ship, I hit my cloaking device as soon as I'm obscured, and immediately bank left, headed right at them. I redirect power to weapons as I slowly drift above them, knowing full well that my first shot will take me out of cloak. I better make it count. My rocket volley comes raining down from above. I have become the sniper's worst enemy. He attempts to turn into me with his starboard side, where his shields can protect him, but it's too late. He's too slow. As I watch the pieces of his ship rain down and my teammates cresting over the horizon, I know the tides have turned. For now.

This is what it's like to play Dreadnought, the upcoming team-based class shooter by Spec Ops: The Line developers, Yager. Where other space-flight sims put you in the shoes of rookie-level fighter pilots, Dreadnought places you in the captain's chair, commander of your own capital ship. You and your teammates compose an armada in the skies and those armadas dominated the PAX East show floor in both presence and fun.

Forget what it's like to pilot a fighter plane and leave your twitch-based gameplay at the door. This game is all about strategy and planning, where a poorly planned turn can cost you the round. Part Black Flag legendary ship combat, part first-person shooter, Dreadnought's slower paced action might take a few rounds to get used to, but it grants the ultimate feeling of achievement and reward when you finally take down a flying fortress from space.

There are five classes of ships to choose from, allowing your team to be as varied as your combined skill set. From the distance-based sniper-class ship, to the fortress sized dreadnought, and all the way down to the Support-class healer, this is a game all about teamwork. The game's exceedingly large scale and slow pace can lead to a lack of information and feedback on how your actions are affecting the game state from a single-player perspective, but this just enhances your reliance on the rest of your team. Each ship needs assistance to survive and, ultimately, win, putting an emphasis on communication. There are no rogue heroes here as there may be in a smaller ship, twitch-based game. While this might frustrate some, players who like grand-scale strategy will relish in it in the more relaxed pace and the resource management aspects.

But this isn't Dreadnought's first show of team deathmatch, and a lot of this can be old news to some. What is new is elimination mode, first showcased at PAX East. What makes Dreadnought's elimination mode so novel is that once you lose your capital ship to the dreaded cannons of your opponent, you are far from out of the game. Instead, you come back as a fighter, attempting to assist the major ships still in the game. And this is where the sheer scale of Dreadnought shines. Back in the action in a twitch-based shooter mode, the capital ships obscure the sun and dominate the skies. Before, the terrain was hard to navigate, making any advancement slow going. But now, the capital ships become terrain in of themselves, as you buzz around distracting the opponent and slowly whittling them down from their respective weak points.

Overall, Dreadnought is a space combat-sim experience you won't want to miss. Never before had I felt so powerful in traversing the skies as I did in this ultimate aerial chess match, where your rook has cannons the size of a house and your king slowly maneuvers to eventually drop a crater-forming nuke - that is to say, if your opponent doesn't time his nuke properly to intercept yours. Who wouldn't want a try at wielding the power of a first-person nuclear bomb-shooter? After my hands-on experience, I know I do.