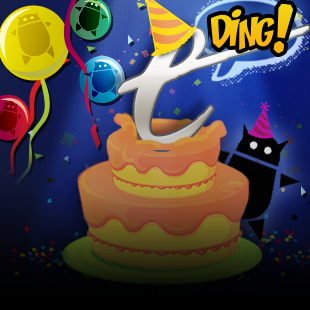 Julianne Capps and Alexander Macris were two of the original founders of The Escapist when it launched back in 2005. Capps was the Editor in Chief, while Macris was the publisher. We asked them a few questions about the site launch and their memories of that fun, but stressful time.

The Escapist: What was the biggest challenge bringing The Escapist into being?

Julianne Capps: Overall, I'd say it was the sheer amount of stuff to be done, from big design and theme ideas, down to whether or not to use the Oxford comma as part of our style guidelines. Themis was already a very lean shop, and everyone worked hard and wore lots of hats. Then we decided to start The Escapist on top of our full workloads. It was really a labor of love; we squeezed every ounce of effort we had into bring The Escapist into being.

Personally, it was learning to be an EIC! When I was put in charge of All Things Written for The Escapist, I'd never been a journalist before, let alone an Editor-in-Chief. I gave myself a crash course on journalism, editing, AP style, creating a voice and surviving on coffee (while still maintaining my other duties as the copywriter for the marketing arm of Themis). I read everything I could find on the topic, researched submission/style/substantive guideline for magazines I admired, synthesized those and wrote the first iteration of those guidelines for The Escapist. Once those guidelines were done, I had to build a process by which we received, accepted and edited our articles. Each of the other founders had equally daunting tasks on their plates. Looking back on it, it's kind of madness and amazing what was accomplished, how quickly, by so few people.

Alexander Macris: Securing a sustainable revenue stream! Most of the game publishers weren't particularly interested in advertising with us. They didn't understand what we are trying to do. "Where are your previews? Where are your reviews? Why do your writers all seem to think that the game's developer is more important than the game's publisher?" So we initially aimed at mainstream advertisers. It was clear to us that gaming was to the millennial generation what rock-and-roll had been to the baby boomers. Unfortunately this was not ... immediately apparent ... to major ad buyers circa 2005. I haven't suffered that much rejection since dating in high school! For a long time we subsidized the Escapist with revenues from our other businesses.

The Escapist: Looking back, if you could have done things any differently before or during launch, what would you have changed?

Capps: I'd have gotten a journalism degree. No, I kid, my ancient history degree actually served me quite well, in that I was quite adept at researching, synthesizing information and writing. I think maybe not have had quite so much content, at least in those first dozen or so issues, while we got into a production rhythm. We were procuring, editing, designing, hard-coding into the old site and publishing approximately 9,000 words per issue between the Tuesday release and the Casual Friday addition. An average novel is 80,000-90,000 words. So, we were, with the help of our writers, going from an issue idea, to a fully designed publication of a novel (if novels had lots of art) every two-ish months.

The Escapist: What is your fondest memory of the first year?

Capps: When you work that hard at something you love, you build a special camaraderie with your teammates. We worked hard in part because we believed in The Escapist's ideals and aspirations, but also for each other. It's hard to pick one fondest memory, I have several: The brainstorm session in which we decided upon the name The Escapist. Coffee- and sugar-fueled editorial meetings in which we came up with the next few months' editorial calendar. The annual New Year's Eve Team Humidor (editorial team) cigars at midnight. Several writers thanking me for the editing work I did for their writing, saying I'd made it better. The champagne toast after hitting the send button for the first issue out the door. I guess the common thread in all of those is I remember fondly the team. It wasn't always rainbows and ponies, but when it was good, we were Awesome.

Macris: What I remember most fondly was the hugely-positive reception we received from the audience. I kept a log of the feedback and even 10 years later I get a flush of pleasure when I read it.

"The Escapist has, by far, examples of the best written gaming journalism I have ever read- either in print magazines or online."

"After reading a few selected articles from various issues, I had to pick up my jaw from the floor."

"If you haven't yet read the video gaming magazine The Escapist, you should! I'd say it's the smartest magazine of its ilk, ever."

"There's more interesting commentary in the first issue than in all the gaming print magazines in the U.S. combined last month."

The culminating moment was having drinks with Chris Anderson, the editor-in-chief of WIRED, and having him praise the magazine for its editorial, its aesthetic, its quality. He paid us the highest compliment you can give and said he'd be stealing some of our innovations for WIRED!

Nowadays of course the sort of game journalism we pioneered is ubiquitous, but in 2005 thoughtful, deep features about game culture were very rare.