Note: This is the second article in a series written by Brad Wardell, the designer of the new real-time strategy game, Ashes of the Singularity. You can check out the first article here.

The human race at the end of 2167 consisted of three primary groups:

Natural humans are much the same as humans have been for thousands of years except with better technology. They represent 99% of the roughly 9 billion humans that live on Earth and to a lesser degree, Mars and the various orbitals that exist in the inner-solar system.

Trans-humans are representative of humans that people of the 21st century could imagine humans evolving into. They exist within their natural born biology that has been heavily augmented with nano-technology to repair cell damage, improve hearing and vision and make the human body nearly immortal.

While many Trans-Humans do suplement their memory and cognititive reasoning via Turinium honeycombs, they remain essentially human. Specifically, if a Trans-Human's biological body is destroyed that person is dead.

Post-Humans are no longer tied to their biology in any way. Their consciousness is anchored entirely in Turinium and their reality is the Metaverse, a virtual world rather than the physical world. They can interact with the physical world through constructs (future versions of what humans call "Drones" in 2017). They can even produce biological bodies and use those as constructs and occasionally do when interacting with Natural and Trans Humans. However, unlike a natural or trans-human, any biological construct produced by a Post-Human is a meat puppet with its consciousness stored entirely in Turinium.

There is also a 4th group comprised of a single individual: Haalee. Born in the 21st century, she was the first strong AI and remains unique.

To understand Turinium one needs to first understand Moore's law and the general concept of computing power doubling every 18 months. In 2015 Intel released a new CPU architecture called Skylake. It uses a 14nm process. In early 2021, Intel released the 5nm architecture called "Tiger Lake" that was half that size. Eventually, these architectures reached their smallest possible physical size. This best possible form of computing matter was named Turinium. At that point, how much one had of this material was the measure of ones wealth. Even in a post-scarcity economy human beings still craved more.

Historical Essay: The Crisis of 2163

Once the miracle of Quantum Streaming opened the stars to human reach it quickly became apparent that most worlds were not suitable for Turinium colonization. For example, a gas giant can't be converted nor can worlds with heavy gravity or extremely high temperatures or pressure. When Quantum Streaming was first realized, this rarity was more of an academic quandary given that there there fewer than a dozen Post-Humans, all of whom resided on Earth.

In 2163, problems began to arise as the first Post-Humans began to convert the two Martian moons into Turinium. The number of Trans-humans evolving into purely a Post-Human state moved from a trickle to a torrent. There were millions of Trans-Humans, many of whom would eventually make the leap to becoming Post-Humans along with billions of natural humans that would likely make the same journey. It became apparent that the rarity of suitable worlds for Turinium conversion would be an issue. 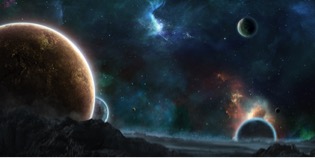 An additional problem began to manifest soon after the Post-Humans divided up the Turinium of Phobos. As the so-called sentience of some Post-Humans increased, their view of other humans changed. In essence, some Post-Humans saw natural humans as little more than "bugs" and saw no reason at all to allow the unevolved to infest the rest of the solar system, let alone the galaxy.

The situation became critical when one of the early Post-Humans suggested converting Earth itself into Turnium with the natural humans eradicated as little more than a biological pest. Some even suggested that Turinium could be modified to form the same molecules that living things are already made up of - i.e. convert life into Turinium (or at least a material close enough to be of some utility).

Luckily, the computer AI Haalee, who still maintained the largest concentration of Turinium, was able to unlock coordinates to several hundred worlds and suggested a league or Post-Human government to equitably share these worlds amongst both the existing Post-Humans and initiates.