Another week, another study attempting to draw a correlation between the fictional violence - or fictional perceived sexism - in video games and real life attitudes. In a new study, published in the journal PLOS One Wednesday, researchers attempted once more to show a link between fantasy "sexism" and real life views on women. A number of publications have already reported on the study, which measured the responses of Italian high school students after playing three different types of games - "neutral," "violent," and "violent sexist." Each category included two similar titles - the "neutral" games were Dream Pinball 3D and Q.U.B.E 2, the "violent" games were Half Life 1 and Half Life 2, and the "violent sexist" games were GTA San Andreas and GTA Vice City.

Each participant was given a particular mission to complete in the games. Afterwards, they were asked, on a scale of 1-7, how "violent, involving, and exciting" they considered the game to be, and how sexualized the female characters in the game were. In addition, they were asked how much they identified with the character in the game, as well as their stances on so-called "masculine beliefs" - examples given were "Boys should be encouraged to find a means of demonstrating physical prowess" and "It is OK for a guy to use any and all means to 'convince' a girl to have sex." 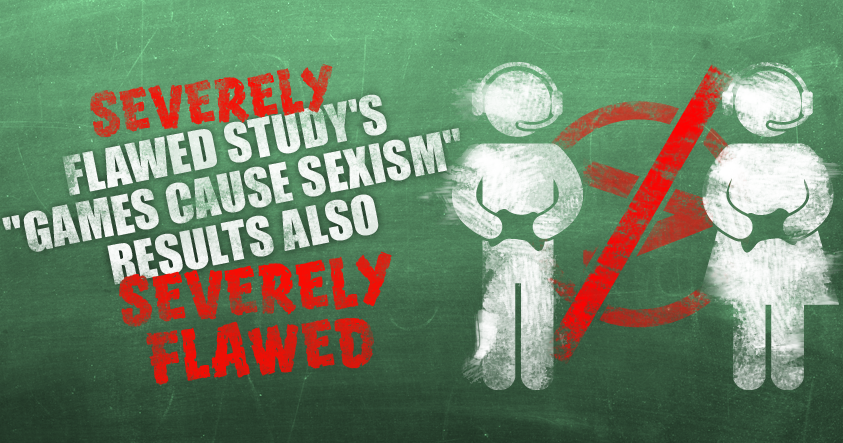 After this was finished, participants were shown images of a girl who they were told had been physically abused by a boy, and asked how compassionate they felt about her. The researchers determined that boys who played "violent sexist" games were more likely to identify with the character in the games they played, and that group was less empathetic to the females in the images they were shown. The researchers determined that their findings were "in line with previous studies showing that violent video games can desensitize individuals to real life violence."

"One of the best predictors of aggression against girls and women is lack of empathy," reads the study, conducted by researchers from the United States and Italy. "The present research shows that violent-sexist video games such as GTA reduce empathy for female violence victims, at least in the short-term."

"More important, it moves beyond the question of whether violent games are harmful per se to address the important questions of who is most likely to be harmed by violent-sexist video games, and through what mechanism does the harm occur," the report reads.

"This investigation of virtual representations of males and females in video games is extremely relevant, because video games have distinct features compared to other forms of media and different effects on males and females," it continues. "Unlike images in traditional media, game characters are designed to respond to a user's actions, which can promote a powerful experience that goes beyond passive media consumption. Often these interactions mirror communication in the physical world, and users often react to virtual situations in natural and social ways."

"Unfortunately, it appears that GTA might make the world a worse place for females."

The study concludes that "male participants who strongly identified with the misogynistic game characters" were more likely to show a reduction in empathy.

"Unfortunately, it appears that GTA might make the world a worse place for females."

Whoa. That is a pretty heavy determination, and one that calls for more investigation into the study as a whole. So, I investigated.

The study itself used 154 participants between the ages of 15 and 20, with the average age being about 16. According to the data for the study, 48 of the participants played one of the Grand Theft Auto titles, described in the data as "violent sexist games." Of those 48, 22 were 15 years old, 22 were 16 years old, 3 were 17 years old, and a single participant was 18. Yet both games that these participants were given were recommended for players ages 18 and older. The fact that people universally deemed too immature to play a particular game may have concerning reactions to playing aforementioned game is not particularly groundbreaking - otherwise all games would be recommended for all players.

There was no attempt to gauge the opinions of the participants prior to exposing them to the games - so there was no baseline on how empathetic they were prior to being exposed to the game, nor was there any way to determine their beliefs on the "masculine behaviors" prior to playing the games. Each participant was given a specific objective in the game, which is not uncommon for a controlled study - however, there was no comparison between the short-term objective-based play (do this mission right here) and the player's ability to play without any sort of mission.

The pictures shown to the participants included only depictions of violence by men against women. There was no alternative that measured responses to female-on-female violence, nor were there any that depicted violence by either gender against a male victim. Therefore, it is impossible to definitively state that there is a sexist result, or simply a potential reduced sensitivity to depictions of violence.

"The present research shows that violent-sexist video games such as GTA reduce empathy for female violence victims, at least in the short-term."

Another glaring issue is the size - and yes, the age - of the control group. The vast majority of participants assigned to play one of the Grand Theft Auto titles were 15 and 16 years old. For them to show an unfavorable reaction to mature content seems, in my humble opinion, to be more of a confirmation that parents should check ratings prior to allowing their children to be exposed to certain video games than anything else. In addition, only 48 participants were included in the small group who played these "violent sexist" games, and half of them were female. Of the "violent sexist" game participants, only 4 were over the age of 16.

I've spent plenty of time talking about that one small group, though. Now, let's take a look at the "neutral" and "violent non-sexist" games. To begin, not a single 15-year-old was assigned either of these titles - every single 15-year-old participant was assigned one of the "sexist" games. The "neutral" games, rated 10+, were played by mostly 18-year-olds, while the pair of Half Life titles, rated 16+, were played by mostly 17-year-olds. Both of these categories were made up 100% of people in the recommended age group for the games, whereas only one participant in the "sexist" group met the criteria for playing the game in the first place.

High-profile outlets like Time, CNET, and Telegraph have parroted this study's findings to their readers, seemingly without so much as a cursory glance at the data behind the findings. There is no issue with the research itself - flawed studies have existed in many forms for many years. However, it's disheartening to see the eagerness with which outlets are willing to vilify video games, and the people who play them, because of these flawed studies. I have plenty to say about Grand Theft Auto being labeled a "sexist" video game - both by the researchers and the media alike - but alas, that is a conversation for another time.

If making a claim as brazen as "GTA might make the world a worse place for females," it may be best to measure the overall increase in "male behavior" attitudes, the overall decrease in empathy, and, perhaps, to do so while using a group of participants who are old enough to legally purchase the game. The only thing this study has taught me is that people who play age appropriate games are less likely to be negatively emotionally impacted.