Disclosure: The Escapist may receive compensation for purchases made through product links. 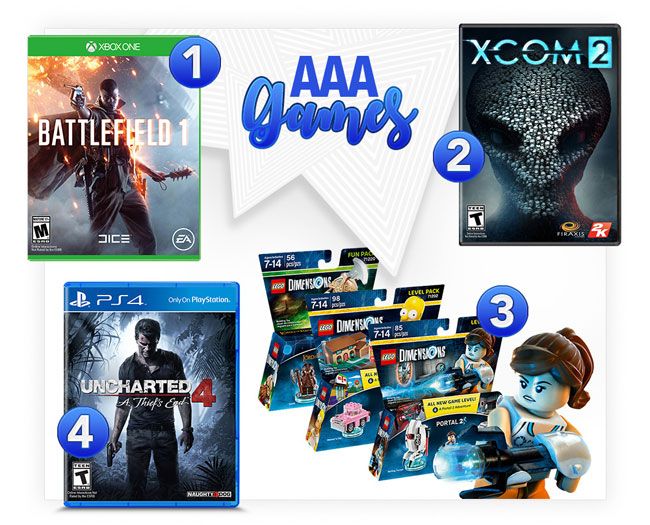 
Developed by DICE. Published by EA. Released October 21, 2016 for PC, PS4, and Xbox One. Review copy provided by publisher.


The latest entry in the Battlefield series eschews the trappings of modern warfare to take gamers back to the days of World War I. Thanks to its setting, the game doesn't feel like most recent shooters. The pace is a bit slower, the vehicles feel less potent, and it's an all-around more balanced experience.

As you might expect, Battlefield 1 is at its absolute best in multiplayer. Because the role of vehicles has been scaled back in keeping with the setting, the infantry gameplay is the best it's been in years. You can expect to see classic game modes like Conquest, Rush, and Deathmatch, but also new additions, including a mode titled War Pigeons that tasks you with fighting over messenger pigeon used to call in artillery. There's also the new Operations mode that drops you into a series of maps and challenges you to attack or defend points throughout them. Battlefield 1 also manages something its predecessors haven't - it packs in a single-player campaign that while short, is still fun to play and enjoyable.

In short, DICE's latest entry in the Battlefield series is also the best in recent years.

Buy it on Origin


XCOM 2. Developed by Firaxis Games. Published by 2K Games. Released February 4, 2016 for PC and September 27 for PS4 and Xbox One. Review copy provided by publisher.


As a gamer growing up in the 90s, the XCOM series fascinated me, putting a much-younger me in command of the only organization capable of halting the ongoing alien invasion. It hit my favorite sci-fi tropes, and it was one of the first games I played that mixed different types of gameplay together. Firaxis rebooted the classic series, and XCOM 2 is the studio's follow-up, where the team took a bit more creative liberty, and it worked like a charm.

The sci-fi, alien invasion setting makes XCOM 2 a great option for strategic gamers with a fondness (or hatred, I suppose) for extra terrestrials. If your game-loving gift recipient typically only plays games like Call of Duty, you should give this a pass, but the deep strategy will be perfect for those that like to take time to think during a firefight.

Buy it on Steam


LEGO Dimenstions definitely targets a younger audience than most of my past recommendations, but the game continues to see a robust expansion release schedule, including some of my favorite franchises, old and new. I'd been a fan of Disney Infinity, but it was discontinued earlier this year, and the Dimensions offerings cover such a wide scope of interests, I'd be remiss not to make mention for those looking for gifts for a younger generation of gamer... or an older generation with a penchant for LEGO and properties from the 80s and 90s. (I'm talking about me, yes.)

Dimensions uses special physical LEGOs that interact with the game, so you'll actually get to build some things with real LEGOs, and pull them right into your game. You can explore and adventure with (and as) your favorite characters, past and present, inside some of your favorite worlds. For my part, I'd be perfectly content playing BA Baracus, driving around the A-Team van, but I'm told Adventure Time is popular among today's youth.

Check it out at LEGO Dimensions


Developed by Naughty Dog. Published by Sony. Released May 10, 2016 for PS4. Review copy provided by publisher.


Hate to see you go, love to watch you leave. Uncharted 4 was one of those games for which I was cautiously optimistic. Finales in any form tend to leave me disappointed, and painfully unsurprised at my disappointment. Uncharted 4 was an exception to that rule. It was discussed frequently that the game would be Nathan Drake's final adventure, and the entire build-up to our farewell to the globetrotting adventurer showed Nathan struggling to reconcile the life he had - and the one that we had with him - with the life he is attempting to have.

The game is visually stunning and, to the surprise of no one, incredibly cinematic, but it doesn't try too hard to be a movie - there is still plenty of room for demanding gameplay and challenge, particularly in the multiplayer mode.

In short: If Uncharted 4 was the only PlayStation 4 exclusive ever, I would purchase the system all over again in a heartbeat.