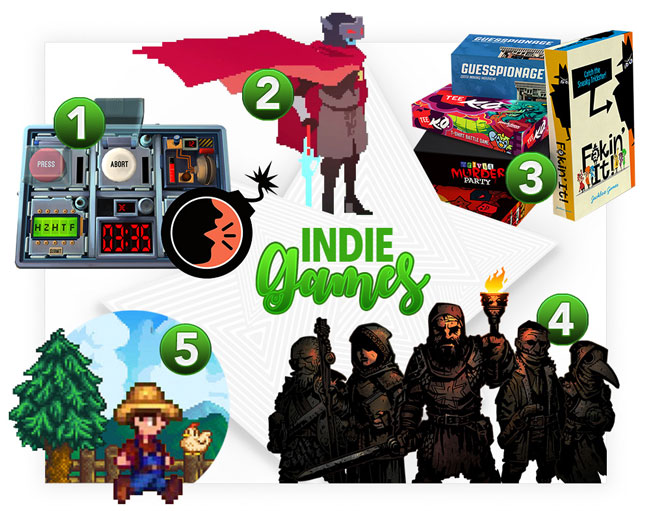 Keep Talking and Nobody Explodes


Developed and published by Steel Crate Games. Released October 8, 2015 for PC and October 13, 2016 for PS4. Review copy provided by publisher.


One of the great things about indie games is how they embrace ideas that you just don't find in other games. Case in point: Keep Talking and Nobody Explodes. In short, it's a bomb-defusal simulator. But it's much more than that. You see, it's not a game you can play alone. You need a friend to read the bomb disposal manual and walk you through the steps to defuse the explosive. Because you can't see the manual, and your friend can't see the bomb, communication is key.

The bombs start out easy, but quickly become quite challenging. Sometimes the lights flicker out, or the nearby alarm clock goes off, forcing you to set the bomb aside and turn it off. All the while, the timer ticks inexorably down, bringing you closer to the inevitable explosion. It's a great co-op game that you can play with friends across the room, or across the internet.

If you're more into the world of virtual reality, you can also play it on PlayStation VR.

Buy it on Steam


Leading up to its release, Hyper Light Drifter was so far under my radar, it wasn't even registering. News came across my feed that the Crowdfunded game would be releasing the following week and, after viewing a few screenshots (and the rather bold comparisons to The Legend of Zelda and Dark Souls), I figured I would give it a try. Several days later, I realized I had neglected my work, may or may not have showered, and realized that the only way to justify the amount of caffeine I was pumping into my body in order to avoid sleep was to write about the game. I still don't regret that week.

Visually, the game draws obvious inspiration from the 8 and 16-bit eras, yet never feels like a paint-by-numbers recreation of those games. It gives a respectful nod to its influences, with hints of Zelda and Metroid, but never feels like a clone. Rather it adopts the most successful elements of the games that inspired it and crafted them into an experience that is simultaneously familiar and fresh. It's unapologetically difficult while still being consistently fair.


"Party games" are a dime a dozen on consoles, but Jackbox is the only one that really does it right. Rather than forcing everyone to use a controller, in the Jackbox games, players simply use their own phones/tablets/touchscreen devices as a controller. The huge advantage of this is that you can easily have up to eight players in a game (and even more in the "audience"). The games themselves are also hilariously fun. Quiplash 2 challenges players to write the funniest response to a prompt, Guesspionage has players guess the percentage of people that do a certain thing (like fart in the bath), Trivia Murder Party is what Saw would have been like if Jigsaw was a trivia freak, Fakin' It challenges players to find the one player who is faking his responses to prompts, and my personal favourite, Tee KO, has players create T-Shirts by mixing and matching images and slogans created by other players. Whenever there's a party at my place, the inevitable question is "when are we gonna break out Jackbox?"


Developed and Published by Red Hook Studios. Released January 19, 2016 for PC, and September 27, 2016 for PS4 and Vita. Review copy provided by publisher.


Games don't tend to be universally enjoyable, but Darkest Dungeon is one of those games that breaks the rule, and does it affordably. The gothic horror theme will delight fans of that genre, but won't detract from the enjoyment for people that care mostly about the gameplay. The gameplay is where Darkest Dungeon, ironically, shines the brightest. Dungeons are scary, and your team will get stressed out, they'll catch diseases, and they'll develop personality quirks. You'll need to fight to survive while you explore dungeon depths, combat all variety of monster, from ogres to Lovecraftian monstrosities, and collect loot to bring home. Fitting the dark, foreboding aesthetic, if you do lose a team member, they're dead forever, memorialized in the town's graveyard.

You'll be hard pressed to find a gamer that won't be able to appreciate Darkest Dungeon, and the $25 price tag ensures they'll get your money's worth.


Developed by Eric Barone. Published by Chucklefish Games. Released February 26, 2016 for PC, PS4, Wii U, and Xbox One. Review copy provided by publisher.


Stardew Valley is a indie pixelated farming simulator. It's a love letter to those old school Harvest Moon games, so fans of the series will definitely enjoy it - but even if you've never played them you'll still have a blast. It is honestly one of the most relaxing, soothing video games I have ever played. If someone you know needs to just forget about their worries, feed the chickens, water the crops, and lose themselves in another world, then this is the game to get them. A word of warning, though: once you're lost in the world of Stardew Valley, it can be hard to find your way back to the real world.