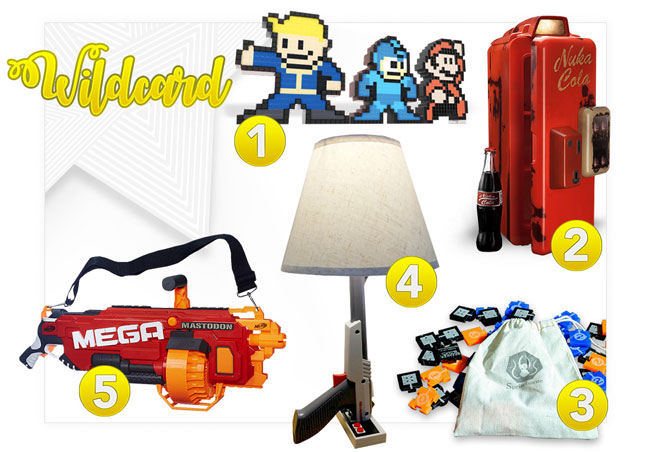 
Produced by PDP. Available at Gamestop on November 25, 2016. Review units provided by producer.


For the gamer that loves to show off their retro-gaming chops, PDP will be launching Pixel Pals, a new line of 8-bit figurines featuring some of the most iconic characters in the history of gaming.The options are extremely limited at the moment, with only three characters, but at least they picked the right characters to lead with.

For now, you can pick from Mario (Super Mario Bros 3 version), Mega Man, and Vault Boy (from the Fallout series), and the figures are higher quality than I'd expected from a novelty like this. I was skeptical of the light-up feature, but it's a surprisingly subtle effect, and it actually does a lot for the look. It does eat batteries pretty quickly, though, so don't forget to turn it off. Pixel Pals will release exclusively at GameStop on Black Friday for about $15.

Check them out here.


Sold by ThinkGeek. Available in mid-December 2016.


If you're like me, you love to have interesting things on and around your desk. There are few things more interesting than a Fallout-themed Nuka-Cola Mini Refrigerator. The retro-looking fridge is just under two feet tall, nine inches wide, and 10 1/2 inches deep. It'll hold a twelve pack of 12 oz. soda cans, and features a five foot long power cord.

There are a couple of caveats. First, it's somewhat heavy, weighing in at nine pounds. Second, it needs four inches of space behind it for ventilation. But if you can live with those, you can have yourself one of the coolest mini-fridges on the market today. Now if you could just find some Nuka-Cola to stock it with!

Buy it at ThinkGeek.com


Breaker Blocks is a 1v1 tabletop game that took me by complete surprise this year. It's simple to learn - I have family members who think Clue is the beginning and end of tabletop gaming that were able to learn the basics within five minutes. Games themselves last between 10 and 20, and include you strategically battling against your opponent in order to control more circuits on the board. You can use power tiles from your own hand, or play action tiles that change the makeup of the game in different ways - from destroying a played tile from your opponent's side of the board to nuking both of your hands and having to start over.

Every copy of the game is created by a one-man studio, and consists of 3D printed acrylic components that can be set up, and cleaned up, in seconds. Breaker Blocks was designed with the goal of being portable, approachable, and quick - making it one of the best tabletop games to play with your family over the holidays.


My best gaming memories oftentimes happen to be my earliest. The rush of beating a horrifically difficult game, only to be told the devil was screwing with me and I had to do the entire thing a second time. A stack of notebooks filled, front to back, with images of item-placement passwords because so many games came without the ability to just press "save." And, of course, the first time I picked up a gun.

The NES Zapper Light Gun was one of those peripherals that always just felt right - as so few often do. Even before entering the console market and saving video games forever and ever amen, Nintendo was hard at work on physical light gun games. But the release of the NES brought with it the NES Zapper. Aside from its lack of shooting-the-stupid-dog-in-Duck-Hunt-in-its-stupid-face abilities, the NES Zapper remains the single most iconic weapon in gaming. So what is one to do when the thing has passed it's prime? Turn it into a lamp, of course!

The Etsy Store for 1upForge is filled with reimagined consoles and controllers, with lamps, key holders, hooks, and more. But the NES Zapper Desk Lamp steals the show. It's sleek, it looks pretty sturdy, and it channels nostalgia without being bulky or gaudy. Definitely the perfect gift for the retro gaming fan in your life. Or me. You can also get it for me.

Buy it on Etsy


Developed and produced by NERF


There's a reason why shooters like Call of Duty and Battlefield sell millions of copies every year: it's fun to shoot things. Obviously, it's rather frowned upon to shoot people in real life with real guns. NERF solves that dilemma by offering us a selection of fake foam dart launchers that allow us to shoot at our friends and family to our heart's content. The big ticket NERF gun this year is the N-Strike MEGA Mastodon, which not only shoots the much larger MEGA NERF darts, but thanks to a battery powered chamber, has fully-automatic action. The perfect gift for the person who loves to annoy.