While The Nintendo Switch is fairly lackluster as a home console, it's amazing performing its real purpose: a successor to the 3DS.

Nintendo has been very secretive on its upcoming Switch console, ever since it was first revealed last year. At PAX South 2017, we finally got to get a lot of hands-on time with the unique new console, and alongside our previews of 1, 2, Switch and Breath of The Wild, we're happy to supply you guys with a preview of the actual device itself, and some of the games we played that didn't warrant a full-on preview of their own. 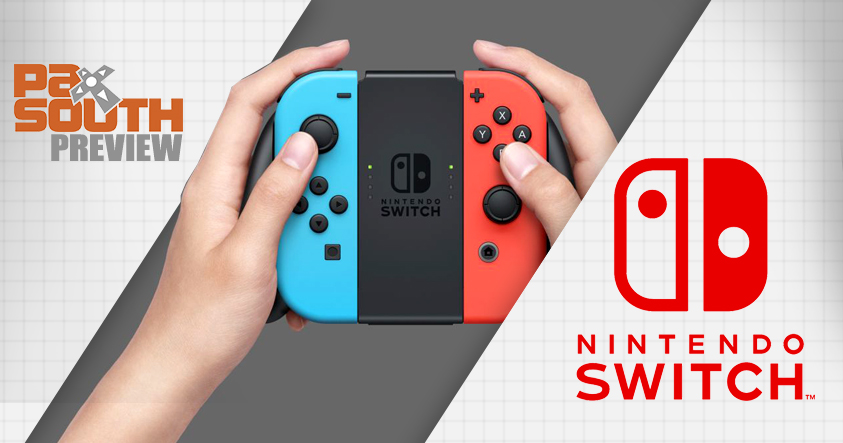 Let's start with how the thing actually feels. I was most interested in the Switch's portable tablet mode, which essentially turns the whole thing into a little handheld console. Playing games in this mode felt pretty natural, and strikingly similar to playing games on the Wii U's tablet. Sure, it runs a bit hotter and is a bit bulkier than your average handheld, but I did buy into the idea that it could be a truly portable console, just like a 3DS or PS Vita. The screen only outputs at 720p, but it's so small that it isn't really a big deal - games still look crisp, sharp and run smoothly.

Being able to take full console titles on the go, rather than having a separate system for portable gaming, is what will sell this system, and I'm happy to report that it serves this function quite well.

Unfortunately, this doesn't really transfer over to the game's console mode. When hooked up to the TV, players are given the choice of three different control schemes (with a few exceptions) - holding a JoyCon in each hand, connecting the two JoyCon halves to the JoyCon holder, or using the Switch Pro controller. I'm going to go right out and say right now: I hate the JoyCon. In all of its forms. They are these tiny, flimsy, uncomfortable things that I constantly feel like I am about to crush.

When holding one in each hand, you can slide on yet another attachment to each of them that adds a wriststrap and makes the top SL and SR buttons more pronounced. It's annoying, but if you don't do it, it's basically impossible to press said SL and SR buttons, and is highly recommended for games where multiple players are using a single JoyCon as a controller like 1, 2, Switch. When docked to the JoyCon holder, they just feel weird. It's this odd, square thing that feels like it was just slapped together to appease players who disliked the "one JoyCon per hand" method.

The good news is that the Pro Controller is just a big refinement of what made the Wii U pro controller so great. It's got the fancy HD rumble of the JoyCons, and Nintendo have finally come to their senses and switched the control sticks to mimic the vastly superior Xbox One controller layout. If you're playing games on the TV, especially "serious" games like Zelda and Mario Kart, you're going to want to use the Pro Controller.

I was impressed with the ease in which the system could switch between the two modes, but when you think about it the "dock" is essentially just a charging station and a HDMI adapter.

At the end of the day, games are what sell a system, and I feel like Nintendo has a long way to go on this front. As well as Zelda and 1, 2, Switch, I played ARMS, Mario Kart 8 Deluxe and Snipperclips. Arms is this strange fighting game where you "punch" at your opponent using a JoyCon in each hand like a boxing glove. It's very Wii Boxing. There are a number of colorful characters with different abilities, but it feels more like a mini-game than the full-priced title it is. This is the kind of game that should have been included in 1, 2, Switch.

Mario Kart 8 Deluxe is fun, but it's just the same old Mario Kart 8 you already played on the Wii U. It has a handful of new characters, karts, and maps, and it does have the proper balloon battle mode that we asked for. But you've more or less already played it, and Nintendo is asking you to buy it again. At full price.

Finally, Snipperclips was my surprise favorite. It's this neat little two-player co-op puzzle game where you play as two little bits of paper, and have to "snip" sections of each other in order to contort your bodies to fit into certain places. It's delightfully cute, difficult, yet not frustrating, and as a "e-shop" $29.99 title, much more competitively priced.

I think, as a home console, The Nintendo Switch is a bust. It's not as powerful as a PS4 (made obvious by the framerate issues I had on Breath of the Wild) which means that it's going to have the same third-party issues that the Nintendo always has. We're already seeing a desert of game releases for the coming year, and a mere seven launch titles.

However, if you think of the Switch as a new handheld, it's actually quite neat. I can see 3DS developers quickly jumping ship, and despite how often Nintendo told me that "we have plans to support the 3DS for a long time," and "the Switch is not a 3DS successor," I foresee the Switch replacing Nintendo's handheld division before long.

TL;DR it certainly has potential but don't get this one at launch unless you really want to play the new Zelda and you don't have a Wii U.