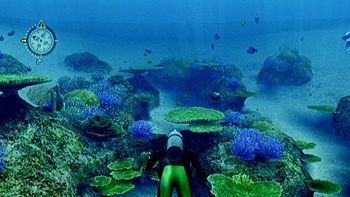 Last weekend, I traveled to Pennsylvania to visit with my mom, who didn't really pay much attention to videogames until I got a job writing about them and she saw coverage of last year's E3 on television. I figured we'd spend our time together doing a little shopping, getting a cheesesteak from my favorite local pizza shop and perhaps watching some movies. I certainly didn't think I'd spend the weekend sitting next to her on her overstuffed couch, playing Big Brain Academy and trying to explain the plot of Super Paper Mario. Even more surprising was that my mom, videogame neophyte though she might be, was instrumental in my realization that I'd been acting like a gaming chump.

Although I spent many a childhood evening playing Pitfall II or Missile Command with my dad, my mom never enjoyed gaming. She frequently had to leave the room when we were playing, saying that simply watching the games made her so tense that she got a headache. On those rare instances that she did stick around, she wrote off videogames as being too grim, too violent. She refers to modern games as being "full of dark corridors where you kill people or shoot aliens," an analysis I'm hard pressed to dispute.

Her attitude changed a bit when she discovered the Nintendo Wii. A report on The Today Show about retirement homes using Wii Sports as an activity for older residents brought the console to her attention, and its simple motion controls piqued her interest to the point that she asked to try it when she visited me last summer. A few games of Wii Bowling were all it took to set her on a path that eventually led to her purchasing a Wii during Best Buy's "Wii for Women" event. She only has a handful of games, but she plays them virtually every day, and frequently calls me to give me updates on her progress.

Having stupidly failed to pre-order Wii Fit, I brought along a copy of Endless Ocean as a belated Mother's Day present instead. I hadn't played it yet, myself, but I'd heard that it was very relaxing, very pretty and had lots of neat fish. Mom's really more of a birdwatcher, but I thought it sounded like something she'd enjoy. It was somewhat more complicated than the other games she'd tried, but I figured I could help walk her through the controls until she was comfortable playing on her own.

In Endless Ocean, you play as a scuba diver exploring the waters of Manoa Lai, which are teeming with all manner of colorful fish. You're hired not only to act as a guide for tourists seeking some underwater thrills, but also to help map the area (which you do simply by swimming through it) and catalog various kinds of sea life. You gain information about fish by feeding them, playing with them and, believe it or not, petting them. Interact enough with a fish, and information about its species is added to an encyclopedia that you can access whenever you like. Although the above-water graphics are a bit on the ugly side, everything under the sea is simply gorgeous, with rays of light gently filtering through the water to illuminate delicate branches of coral and towering rock formations. The fish themselves are beautifully animated, colorful and wonderfully varied.