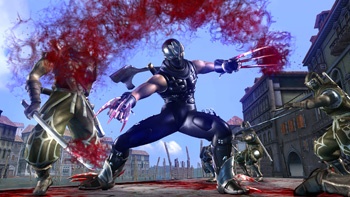 As I settled in on the couch this weekend, sunlight streaming through the windows and my dog snoring at my feet, a storm raged on my television. Xbox 360 controller firmly in hand, I watched as the camera dove and swooped over the black waves of a tumultuous sea before finally coming to rest on the Team Ninja logo. I smiled, for the day I had long dreamed of had finally come. Today, for the first time in my life, I was going to be good at a Ninja Gaiden game. Tomonobu Itagaki himself had promised me as much.

Well, that's not entirely true. What he had actually said to me was that anyone, even so-called casual gamers, would be able to succeed at Ninja Gaiden II and even pull off some really cool moves in the process. Ninja Gaiden II would be far more accessible than other games in the franchise, he assured me, and not just for the leetest of the leet. No more Ninja Dogs, no more making players feel bad for having the life expectancy of a fruit fly with diphtheria. Everyone was welcome to share in the ninja love.

Many have found fault with that particular change of heart, accusing Itagaki of dumbing down the game for the sake of selling a few extra copies. Which, frankly, he is, but I don't care. I love Ninja Gaiden - believe me, I do - but it's just stupid amounts of hard. I don't fault it for its difficulty level; in fact, I appreciate its unrelenting demand for well-honed gaming skills, its punishing nature and lightning-fast action. I'm just never, ever going to be any good at it.

My experiences with Ninja Gaiden were never what you would call "rewarding." With enough effort, I sometimes managed to achieve levels of not sucking quite so much, but I never once felt like I was the game's master. In my best moments, I didn't feel as though I was gaining ground, merely not losing it. In other moments ... well, in other moments I simply turned off the Xbox in favor of doing something that was less of a blow to my self esteem. Like trying on bathing suits after eating a pint of Häagen-Dazs. Christie, the snow-haired fighter from Dead or Alive (another Itagaki creation) chides her opponents by telling them they are "weak and unskilled," which was a pretty good summary of how I felt every time I attempted to step into Ryu Hyabusa's blood-soaked shoes.

So when Itagaki assured me in warm, soft tones that even I, ninja newb though I might be, could do well at Ninja Gaiden II, I rejoiced. I knew I was never going to top the leaderboard or inspire others with my Amazing Feats of Ninjastic Awesomeness, but I was going to actually make it to the end of a level without feeling like a hamfisted moron, and that was good enough for me.

These were the thoughts that were drifting happily through my head as I watched the intro movie, in which a chesty CIA agent who apparently gets a frequent-buyer discount at Strippers-R-Us asks a shopkeeper if he's seen Ryu Hyabusa. Bad guys swoop in and snatch the girl, prompting Ryu to make a dramatic entrance and kick off the first fight of the day.