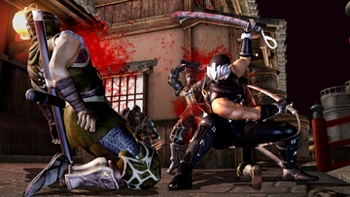 A handful of Spider Clan members attacked me in a fairly delicate manner, giving me time to familiarize myself with the basic controls. Rather than pounce on me all at once, they took my assault in turns, as if to say, "No, no, don't rush. Please, take your time learning how to turn us into chum." It was all so warm and friendly. A bit of button mashing and I was alone again, free to examine the stunning environment and smash a few nearby pots. Oh, this was going swimmingly! If skipping with glee wasn't strictly against the ninja code, I would've.

Even the dead ninjas that I encountered along the way were friendly and helpful, leaving behind notes telling me how to execute new moves like the Shadowless Footsteps and Reverse Wind. Some of the dead ninjas were sad, because they couldn't pull off the moves that I was achieving. Poor, poor, dead ninjas. They would never feel the inner warmth and glory that comes from being good at Ninja Gaiden. The feeling that I now possessed.

The feeling that lasted about ten more minutes. The first few clutches of Spider Clansmen were pretty laid back and easy to dispatch, but they eventually got tired of screwing around and began attacking me in earnest. The careless mashing of the X and Y buttons that had gotten me this far started to fail me, as enemies blocked and dodged and effortlessly cut me to ribbons. I sliced the arm off of one ninja, only to have him ensnare me in a choke hold a moment later, his bloody stump glistening wetly as I gasped for air.

This was supposed to be easy?

I frantically hacked and slashed through wave after wave of deadly ninjas, dashing and jumping and wielding my Dragon Sword with desperate fervor, cursing Itagaki, his sunglasses, his leather jacket and his terrible, terrible lies. This wasn't the easy game I'd been promised, this was crazyfastninjafighting with magic and claws and special moves and...and...and...

And I wasn't dead yet.

I'd been playing for more than an hour, and I wasn't dead yet. I'd had to retreat more than once, and I still seemed to be pulling off certain moves more by accident than by choice, but I wasn't dead yet. Empowered by my character's remarkable will to live, I tentatively approached fights with more in mind than simply surviving. I concentrated on using specific moves against specific enemies. I used my Ninpo magic strategically, and to the greatest effect. By the time I did a flip off a wall - on purpose - and came down upon a claw-wielding ninja with a cruel and devastating blow, I knew that Ninja Gaiden II isn't an easy game, no, but it's an easier game.

Itagaki wants this to be the Gaiden that's for everyone, but even its "easy" gameplay still requires a fairly high level of ability. The truly "casual" players, the ones who spend more time with Uno than Gears of War, are likely to give up mere moments after turning the game on - assuming they dare to try it in the first place. An easy game should allow a gamer with even the most rudimentary of skills to make some sort of progress, to achieve some level of mastery. An easy game should, you know, be easy.

Still, for people like me, who want to walk the path of the ninja but who keep falling on their faces, Ninja Gaiden II a boon. I have no idea how far I'll make it down the Path of the Acolyte, but I'm pretty sure I'll at least enjoy the journey.

Even if it is the hardest easy game I've ever played.