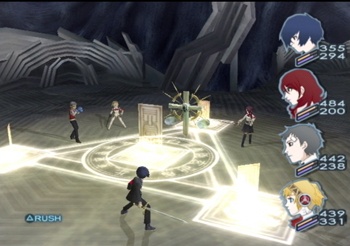 I like RPGs, I really do. Turn based or action-oriented, Western or Japanese, doesn't make much difference to me. They all tend to use the same basic plot (only you can prevent the end of the world, in much the same way only you can prevent forest fires), and the same characters (oh, look a girl wearing white - I bet she's a healer!), but that doesn't dampen my enthusiasm as I hack, slash, and magic my way through them. I'll try just about any RPG you care to put in front of me, and have amassed a fairly decent collection of them over the years. I was rattling off a list of some of my all-time favorites recently - Lost Odyssey, Drakan: The Ancients' Gates,, Disgaea, Persona 3 - when I realized something rather unsettling. I adore RPGs, but I hardly ever finish them.

As I thought about it, I could only recall a handful of role-playing games that I'd seen through from start to finish: Grandia II, Super Mario RPG, and A Link to the Past were the only titles I was sure I'd beaten. Excellent games, to be sure, but all also several years old. Surely I'd finished something more recently? Nope. Lost Odyssey, Blue Dragon, Twilight Princess, Persona 3, Eternal Sonata all sit half-finished, patiently awaiting the day that I pick them up again. Which, judging by my experiences with Dark Cloud 2, Dragon Quest VIII, and Final Fantasy X-2, is never.

It's not that I don't enjoy the games, I do. I'd made significant progress - sometimes playing 20 hours in a single weekend - in each and every one before putting it aside in favor of something else. It wasn't that the games suddenly turned bad, either, forcing me to abandon them in a fit of gaming disgust. I pondered my apparent RPG fickleness, wondering why I finished Mass Effect and Fable when so many other fantastic games went only half-played. And then it hit me: it's because I have a serious case of RPG OCD.

Your typical RPG is chock full of items, chests, and chatty NPCs simply dying to tell you all about some magical geegaw hidden is some cave or other. And I must find all of them. If there are things to collect, I must collect them, no matter how useful they end up being. You could scatter used tissues and expired coupons for laundry detergent throughout a game, and I'd be compelled to track down each and every last one. No matter which RPG I play, I soon find myself knee deep in magical armor and weaponry, carrying around an entire armory's worth of gear for character classes that I don't even use. I have backup weapons for my backup weapons, and make sure I keep at least one of every healing item imaginable, you know, just in case. You might think such obsessive behavior is actually a wise investment, as selling off all that crap nets me a small fortune, and you'd be right - if I ever spent the money. Instead, I hoard that, too, saving it for that special item I just know will be for sale at the next shop.