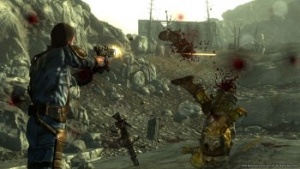 Fallout 3 was easily one of the most anticipated games of last year, if not the last decade, and I was one of the people counting down the days until its release. I hadn't played any of its predecessors (a fact which completely invalidates any opinion I have about the game for many of you out there, to which I say, stop being such exclusionary elitist twerps), but what I knew about it boded well. I marked my calendar. I preordered the limited edition, complete with lunch box and bobblehead. I wore my Vault 101 t-shirt with geeky pride. At E3, I took the game for a half-hour test drive and clapped with glee. Literally. Finally, the glorious day arrived when I could play the game in earnest and I found, much to my surprise, that I hated it.

Well, ok, "hated it" is a bit of an overstatement. I appreciated it, certainly, recognized it for the well-polished piece of work that it was, but I didn't actually enjoy it once I left the Vault. I wanted to love it - it was an epic RPG from the folks who'd made Oblivion, so I figured I should love it - but I didn't. As much as I tried to drink the Kool-Aid, I just didn't care, and for the longest time, I couldn't figure out why.

At first, I chalked it up to the game's rather grim and depressing nature. Wandering around the shattered remains of a radiation-soaked landscape isn't exactly an emotional pick-me-up, and ruined buildings and twisted metal don't lend themselves to the creation of beautiful vistas. As the residents of the Capital Wasteland are eager to point out, life in the world of Fallout 3 sucks and is more than a little depressing. After trying to force my way through it for a few hours, I finally gave up and put it aside, feeling defeated.

I became even more confused when I watched a friend of mine, who absolutely adored the game, as he was working on his second playthrough. The game certainly looked fun, with plenty of quests, combat, and characters, so why didn't I like it? Then, as I watched him open safes, ammunition boxes, and desks, it came to me. I finally figured out what was missing from Fallout 3.

Fallout 3, huge as it is, is almost entirely swag-free. Oh, there are a few unique weapons and a handful of stat-boosting bobbleheads, but by and large when you're exploring a dungeon, it's just to find enough ammo or healing items to get you through that dungeon and into the next one. There's no real material reward built into the game. You find caps (the game's currency), but what is there to buy? More ammo, more healing items, and a few knick knacks for your house. Yawn.

So once you take the reward of loot away, what you're left with as payment for your dungeon-crawling efforts is the story and the world itself, which either works for you or doesn't. Once I realized that I was never going to find the Supremely Awesome Jeweled Dagger of Invisible Death (+10 against the undead, +20 against reptiles every other Tuesday), I found I was better able to appreciate the journey itself. I began searching ruins for a different kind of treasure, the kind that told a more personal story than the quests did. And, occasionally, I found it, in a recording a father left behind for his daughter, or the long-abandoned journals of a group trying to rebuild their lives on a tiny farm. Not quite as compelling as a ring that doubles your armor class or a crossbow that does fire damage, perhaps, but satisfying in its own way.

I was surprised to find that so much of the pleasure I derived from an RPG depended on the quality of loot I got, but I'm not ashamed of it. If I enjoy micromanaging my inventory and keeping a dozen swords that all have slightly different stat attributes, so be it. At the same time, though, I was reminded of a very important truth: Just because a game does not meet your expectations, that doesn't mean you can't enjoy it. I'd gone into Fallout 3 expecting Oblivion with a different coat of paint. That isn't at all what I got, and I didn't know how to deal with it at first. Once I put those expectations aside, I was able to see the game for what it was, not what I thought it was.

I've been playing Fallout 3 almost non-stop since my epiphany. It's an excellent game, but I'd be lying if I said I expected to ever play it again. I'll undoubtedly finish all the quests and without question I'll play the heck out of the DLC when it's released, but when I finally put the Capital Wasteland in my rearview, I won't be turning back. The world of Fallout 3 is vast and entertaining, but it's not really somewhere I want to be. It's hostile and forbidding, full of sadness and devoid of hope. The Wasteland is not somewhere you linger, it's something you push through and endure until you come to a better place on the other side. Maybe that's why there's no loot - who wants keepsakes and heirlooms in a world that bleak?