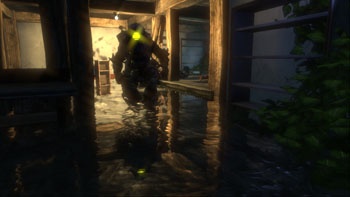 We can't change the fact that new players have to learn a hell of a lot about gaming in general at the same time they're learning the specifics of a particular game. So what can we do to let them experience something like BioShock and still have fun? Here are three suggestions:

1. Adaptive Invincibility -- Newbies have yet to master (or even consider) concepts like circle strafing, headshots, or even remembering to keep an eye on their health, so even with the difficulty turned down low, it's likely they'll still die a lot. They may not even know why they're dying, they just know they can't get past this one bad guy. One solution would be to make the player intermittently invincible if, for example, they've died X number of times in the same general location. This would allow them to get past that choke point and continue on with the game, but would still assume that the player is make an attempt at clearing the obstacle. The further you get in the game, the more you would have to die before the invincibility would kick in. The invincibility's activation could also trigger an on-screen hint that would help the player learn what they were doing wrong.

2. Buy-outs - We've all slogged our way through a game sequence or level that we didn't enjoy so much as endure. I adored Uncharted but hated its jetski, which I saw as unfun chores that broke up the fun of my game. As bad as it is for us, it's even worse for new and casual players. Experienced gamers will sacrifice some fun for the sake of getting back to their game, because they understand that the nonfun is likely temporary, but the new player doesn't have that trust. All they know is they're being frustrated and not having any fun, and this is supposed to be entertainment, after all. One solution is to let them buy out of that particular segment of the game. Whatever currency is used - be it in-game cash, experience, items, or even how NPCs treat you - the price should be steep enough to encourage the player to try and get through on their own merits. Another way to do buy-outs would be to give the player a certain number of "skips," the idea being that their limited nature would make players think carefully about the best time to use them.

3. What Should I Be Doing Now? - One of the biggest hurdles new gamers face is simply knowing what they should be doing at any given moment. More experienced players are used to gaming tenets like fetch quests, escort missions, and in-game journals, but new players are frequently frustrated because they don't know where to go or what to do. A "What Should I Be Doing Now?" button could help not just by telling player where they should be headed (and hopefully marking it on the map), but also making suggestions like "now would be a good time to visit the shop to upgrade your equipment" or even "heal yourself". A brief recap of the story so far would also go a long way towards providing context for the activity; players would know not only that they're headed off to the communication center, but why they're meant to be doing it.

This won't solve all the problems new players face, of course, and I'm not suggesting that all games need to have this kind of accessibility. Some games should be only for the hardest of hardcore, the leetest of the leet. But if we really want all kinds of people playing games - and we do - we need to start being a bit more objective about what we mean by "Easy".

Susan Arendt isn't ashamed to admit she'd use a What Should I Be Doing Now? button. And maybe even some skips.