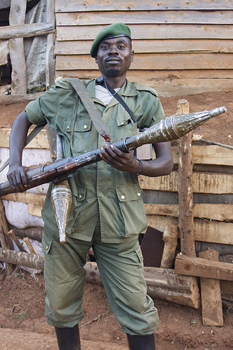 To find out I contacted Sasha Lezhnev, a Senior Analyst with the Enough Project, which monitors the use of conflict minerals and prepares an annual report on their use in the electronics industry. In 2009 he visited a Congolese gold mine. "It's basically a six step process from the mine to the end product," says Lezhnev. "The first stage is the mine itself, then it goes through an exporter in the Congo." That sounds easy, but in the life of a miner it means hauling 110 pound sacks of ore down a dirt road with nothing but sweat and the crunch of compressed vertebrae. If they're lucky, miners will have a chukudu, a rough-hewn wooden scooter used for transport and carrying heavy loads. Along the road, miners encounter the militia or Army unit that controls the mine, who levy an illegal tax on the ore before letting miners in to sell it at the ad hoc towns that develop around the mining sites. Local authorities take their cut too, along with any other armed group the miners encounter. In fact, miners might find their loads "taxed" fifteen or twenty times by the time they reach the mineral trading warehouses that buy the minerals and sell them onto the exporter. This means the miner-the one chipping at the earth with bronze-age tools-rarely makes enough to feed himself and his family.

Once the exporter takes over, he ships the minerals out of the country, often by air. In the conflict mines of Eastern Congo, shipment hub is the North Kivu province's capital of Goma, on the shores of Lake Kivu. Soviet-era planes fly the minerals in and hand them off to middlemen who clean and process them for export. "Then it goes through a neighboring country. Usually Rwanda, in some cases Uganda," says Lezhnev. "It's either smuggled or goes through legitimate export."

The middlemen in Rwanda and Uganda sell the minerals to smelting companies in East Asia via a minerals broker. Smelters in China, India, and Malaysia are the bottleneck of the minerals trade, since there are only about 150 of them worldwide (remember this point, it will be important next week). At this point, all of the ores and raw minerals-both legitimate and conflict-sourced-get mixed together and refined into metals. Coltan becomes tantalum. Tin ore becomes tin. Wolframite becomes tungsten. Gold gets melted into cheap jewelry in the cash-for-gold circuit or gold bars to send to banks or manufacturers. Component manufacturers in Japan and the U.S. then buy the refined tin, tantalum, and gold in order to make the solder, capacitors, and gold wire connections used to build our Xboxes and laptops.

This is the long, decentralized supply chain that Microsoft, Sony, and Nintendo will eventually need to audit in order to verify their devices as conflict-free.

"Like Living in Hell"
If the process I described sounds simple and clean, it's only because I wanted to explain it as plainly as possible. On every step of that journey, someone profits from an illegal tax, and the person profiting is usually the one holding a gun. According to a New York Times article from 2008, a rogue unit of the Congolese Army made $300,000 to $600,000 a month in illegal taxes from holding a tin mine, and may have made as much as $80 million a year. The money buys guns, political influence, and ultimately power. With such unimaginable sums of money to be had, most militias have abandoned their political aims to focus on exploiting the land and their laborers. Some mines operate as I've described them above: under the gaze of armed troops who extort money from the miners. Comparatively, these miners might be considered lucky if they have some money left to drink in one of the canvas tents that serve as bars, knocking back Johnny Walker that's imported through the jungle on foot. Some might watch a movie in the camps' makeshift theaters, which consist of old TVs showing bootleg French films or Kung Fu movies with the audio near drowned out by the generator running the set. Price gouging is normal and the towns are extortion machines controlled by the militias, the Mai Mai in local parlance. Miners don't make any sort of a steady wage. There's food and medicine though, if you can pay for it. No breaks. No compensation for injury. The worst safety conditions in the world.

Other mines operate off slave labor. A large number use children. "Up to 40% of the people working in mines are children as young as 8 years old," says Lezhnev. Some come to work for the summer, hoping to earn enough for their school fees and then never leave. "The mine shafts are very small and go up to 100 yards deep into the earth and so they prefer to use children in them so they can climb in those tiny little spaces. There are people with AK-47 weapons hovering all over the mines abusing people right and left."

Even living near a mine can be treacherous. Areas of mineral wealth are strategic ground for the Army as well as the militias, and the groups will frequently raid mines and engage in firefights around and inside villages surrounding the site. Between November 2010 and January 2011, for instance, a rogue Army unit attacked a number of villages, displacing 40,000 people. "I've met people who have been forced to flee the villages surrounding the mines several times in the previous couple of months," says Lezhnev. "So it really just creates tremendous insecurity and instability on the ground."

And then there's the sexual violence. Human Rights Watch has extensively documented the use of rape as a weapon of war by all sides in the Eastern Congo, but especially the Congolese Army. Rather than individual crimes, the sexual violence against Congo's women is a deliberate tactic of subjugation intended to terrorize the population, and some cases fit the definition of crimes against humanity. In 2008, the United Nations Population Fund reported 15,996 new cases of rape in the country, many of children, though likely that number is low. Some cases involve militias or government troops kidnapping girls and using them as sex slaves for periods of up to a month, while others record incidents of genital mutilation by stabbing or gunshot.

Young men aren't immune to the war either, since both the Army and militias frequently recruit child soldiers as young as ten. A UN report from 2011 claims that an influential Army Major "visited most of the secondary schools in and around Kitchanga in October and November 2010, forcing school administrators to provide lists of children who had previously been associated with armed groups." In other words, kids with combat experience. The Major was apparently successful, since his force added 100 child soldiers during this period, though some fled or stopped attending school for fear of being recruited. He confronted other children at their homes.

"Basically the situation is that minerals are one of the chief drivers of the war in Eastern Congo," concludes Lezhnev. "And what that means for people on the ground is really almost like living in hell."

The Long Road to Clean Sources
Despite everything, our response to the crisis is improving. Public pressure is growing for electronics companies to go conflict-free, and with the Conflict Minerals section of the Dodd-Frank law coming into force in 2014, even the most obstinate manufacturers are beginning to come onboard. Next week we'll talk about how Microsoft, Sony, and Nintendo fared in Enough Project's annual report, consider a number of ways to help mitigate the crisis, and see what we can learn from the action taken against blood diamonds during the Kimberley Process.