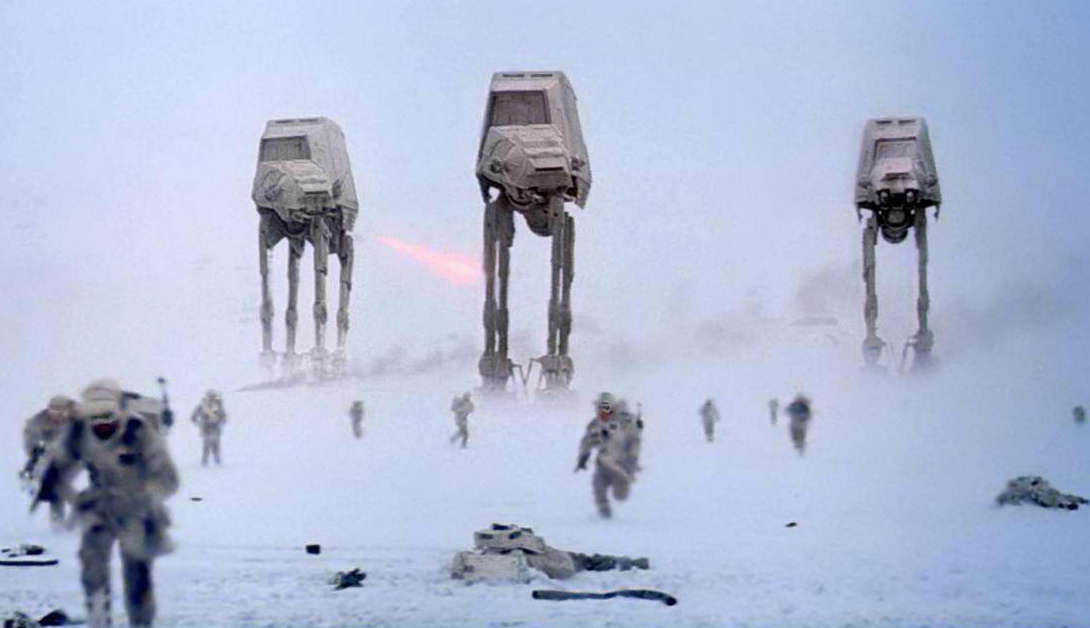 However, the point of the Stormtrooper garrisons wasn't to combat armed insurrection, but to preempt it from even occurring. During the period of Palpatine's New Order, the Garrison and Suppress model was a part of an overarching theory known as the "Tarkin Doctrine," which hoped to rule through fear. The Tarkin Doctrine hoped to rule the galaxy through the threat of military force rather than the direct application of force itself, a concept that jived well with the already overstretched resources of the Empire. However, the application of this doctrine depended on a projection of Imperial power by symbol - the Death Star, which Tarkin commanded after his elevation to Grand Moff. The fact that Tarkin's ideas found a warm audience in the Emperor isn't surprising - let's face it, Palpatine was a religious mystic and was therefore predisposed to be over-enamored with symbolism. In fact, this obsession with scale transcended the Death Star and led to the adoption of other technologies that were either impressively enormous, like the Super Star Destroyer, or could be cheaply launched en masse like the stripped-down TIE Fighter.

These cultural and doctrinal changes further degraded the effectiveness of the Stormtrooper Corps. Military doctrine stressed scale and quantity over quality, so trooper training and readiness levels declined. Imperialization policies enforced standardization of arms and equipment - disallowing individualized loadouts and returning the clone's painted armor to factory white - and punished the use of informal nicknames rather than number designations. In place of the tactical creativity fostered by the Jedi, especially in special forces units, Imperial officers demanded strict ideological conformity and the literal interpretation of orders. Transports and fighters lost their nose art, the highly successful air mobility and gunship programs were scrapped, and the life of the individual Stormtrooper dropped in value. The changes were particularly damaging to the commando units, who were used to acting with initiative and creativity within mission parameters. If you need a single event to demonstrate the degrading combat effectiveness, consider this: When Vader needed to hunt the Millennium Falcon, he had to rely on bounty hunters rather than his in-house units that would theoretically play that role. In other words, in using the Tarkin Doctrine, the Empire was trading the perception of combat effectiveness for actual combat effectiveness.

Now, what does all this mean for Hoth? Everything, really. It means that instead of leading a force that resembled a modern military with air mobility, Vader was forced to make do with troops that trained and expended like World War II-era Soviet conscripts. It means that the Empire's obsession with scale caused him to rely on General Veer's AT-AT walkers that attacked too slowly and lost troops to crossing dangerous ice floes before even reaching the battle. Most of all, it meant Vader lacked the special warfare capabilities that he'd have used 20 years beforehand.

While Spencer Ackerman's Wired piece does point out many glaring errors on Vader's part, I'm not completely sure what I'd have done in the same position when faced with the need to extract Luke Skywalker from Echo Base. Though it was too slow and allowed too many Rebels to escape alive, the AT-AT assault did break the Rebel lines and destroy the shield generator, giving naval assets a firing solution on transports awaiting launch on the snowfields and allowing the Navy to land troops via dropship. And while the 501st didn't make it onscreen much, the storming of Echo Base inflicted heavy casualties on the Rebel Alliance and proceeded in good order. The worst criticism should really fall upon the Navy for allowing so many Rebel ships to slip the blockade and approach the very few vectors where hyperspace is possible around Hoth. So while it was a strategic defeat, Imperial forces at Hoth did kill large numbers of Rebels, including 17 out of 30 troopships, and successfully scattered them. The Empire didn't fail, though it didn't completely succeed.

What bothers me about this assessment is that it never had to be this way. If the Imperial Army hadn't dismantled its special operations capabilities after the Clone Wars, and if its doctrine didn't insist on a grand gesture like the deploying enormous metal elephants, Vader could've achieved his victory with minimal casualties. Unfortunately, the way to do that was to do the opposite of Imperialization, Garrison and Suppress and the Tarkin Doctrine: he needed to think small and trust his operatives.

Luke should not have been difficult to capture. Naturally curious and reckless, mere days before the Empire arrived at Hoth, Skywalker had already wandered past the Echo Base perimeter and been taken captive by a wampa. I'm going to repeat that: what Darth Vader couldn't do with a full ground invasion and an orbital bombardment, a Yeti accomplished with its bare hands and the element of surprise. The "Wampa Incident" makes one thing painfully clear - Imperial Commandos could've captured Skywalker without much fuss, had Vader quickly landed several four-man commando teams on Hoth and given them time to establish an observation point and track Skywalker's movements, then ambushed him with an E-11 blaster rifle on stun setting. And let's not kid ourselves, they could've done it. Hunting and high-value targets like Jedi was the specific function of the Imperial Commandos.

In fact, Commandos would have also been able to assist with the problem of the shield generator. After all, any Battlefront II player knows that the way to crack Echo Base isn't to storm the trenches, but to infiltrate around the flank capturing strategic points as you go. All of the power at Echo Base - from the shield to the v-150 Planet Defender ion cannon - derived from the stolen reactor of a Predator class Star Battlecruiser. Several small teams, deployed quietly, could have slipped in the back of Echo Base via the south and approached the generator. Because the generator would likely be too large to destroy with man-portable explosives, commandos could've targeted the cables, junctions and substations that distributed and regulated the power throughout Echo Base. With their power cut, the Rebels would lose their shield, ion cannon, most of their trench defense guns and most critically the heating systems that kept their ships from icing over and becoming inoperable. Then you jump the fleet in and commence the landings. If you need any more evidence that this would work, consider this: it's exactly what the Rebel Alliance did at Endor.

But any of this would have been both impossible and unthinkable for Vader - impossible because the Stormtroopers no longer had the military capability to carry out this sort of operation, and unthinkable because according to Imperial doctrine, victories had to be won with a massive show of power. Quietly strangling the Rebellion in its crib would not have sent the political statement that Palpatine intended, and despite Vader's silent plots against the Emperor, he needed to appear to be carrying out his master's wishes. In other words, Imperial violence was guided by politics and symbolism rather than military practicality.

Hoth and the storming of Echo Base will always be considered at least a tactical victory for the Empire. However it behooves us to understand that the mistakes that led to the Rebel's ultimate escape and reformation were not due to a single commander, but cultural and doctrinal changes in the Imperial Military as a whole that de-emphasized it as a versatile and creative combat force and instead positioned it as a political stability force. Perhaps Palpatine would have done better if he structured his army to be formidable, rather than merely look formidable.