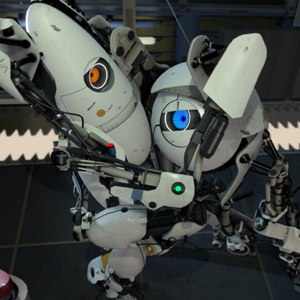 It's true that in this transition some people, maybe a lot of people, will lose their jobs - that is, unfortunately, inevitable. But we also have to remember that losing a job, though awful, is not the end of someone's story. People lose jobs sometimes, but they can also get new ones. The game development community is extremely generous and looks after its own. When one company closes, another starts tweeting links to its jobs section. Also, it eases my mind to remember that the industry is full of creative, ambitious people, and creative people are good at making their own opportunities. There's always the possibility that a group of laid-off developers or writers will band together and create something we've never seen before. Shifting landscapes in the game industry might be hard - very hard - but I know that we can put our heads down and push through to the other side.

It's going to be okay.

Of course, it's not just the game industry that's going through a shift - game journalism is as well. While it's easy to get bogged down worrying about the future of game writing, or arguments about what is or is not legitimate journalism, we also need to recognize is how good we have it.

This is the best time in history to be a game journalist. Not only has web video and internet publication given us an enormous audience for our ideas, but games are deeper and more interesting than ever. Mechanics, visuals, art direction, and storytelling have all leapt forward over the past decade, and we're front-row witnesses to a new medium that's going to transform the world. Games are art, yes, but they're also so much more. Games can teach you to fly an airplane. They can help you learn a new language or treat veterans with PTSD. Games are about to bring so many possibilities to our world, yet we often chose to nitpick or dwell on the medium's failures. While it's true that it's our job as journalists to confront problems like industry sexism and questions about the appropriateness of game violence, in doing so we can't forget to celebrate all the magnificent things games can do - because ultimately protecting the good things in games and gamer culture is our entire reason for confronting the bad. Cynicism should never kill our sense of wonder and possibility.

It's going to be ok.

Look, change is coming and there's no sense in fighting it. But we can help ease the transition if we stop fighting each other.

It would really help for us to be kinder to each other. As developers, as journalists, as players and readers. I know that sounds easy, but it's not. Change frightens people, and fear is always the greatest impediment to kindness. As we see studios dropping staff and game publications closing, as we see companies and writers strike out in directions we don't agree with, it's important that we can discuss things without pulling each other down. There needs to be some place for gentility in our discourse, some acknowledgement that it's alright to think something different and agree to disagree. We can't keep fighting an eternal round of King of the Hill, as if us being right means everyone else must be wrong. Art interpretation doesn't work that way - two differing viewpoints can be equally valid and it profits us to discuss more than it does to argue.

I know we can do it. I've seen developers rationally talk out disagreements over Twitter. I've seen all of us come together to fund Child's Play. Most of the time, when Critical Intel readers don't like something, they tell me why rather than jumping to insults. At PAX, I've hiked around half the convention center to meet colleagues for the first time - if only a few minutes - and they've done the same for me. We are a community that fundamentally cares about one another once we talk face-to-face.

A few weeks ago, while reading an article on a well-known game site, I came across some problematic language. It was the kind of thing that might've gotten a lot of attention had I decided to Tweet it, but instead of doing that, I decided to give them the benefit of the doubt. I wrote the site's editor with my concerns, and immediately upon reading them he agreed to edit the article. Turns out it was just a mistake. No one was offended. Everyone learned a lesson. There was no need to put anyone in the digital stocks and shame them in public. As I closed my computer, I wondered how many other controversies could be solved this way, with a courtesy email rather than a rage post. How much bitterness would we avoid if we made forgiveness a practice? How much energy would we save if we wrote about games more than we wrote about each other?

As long as we're kind to each other, it's all going to be okay.