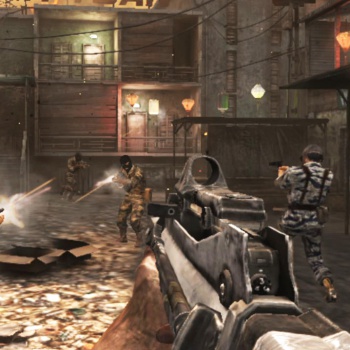 One of the greatest things about videogames is that they allow a player to digitally become another person. We see what they see. We face their problems make hard decisions. You can become a person of a different race, nationality, gender or political affiliation and better understand their life and choices. The ignored potential of this tool is enormous. Instead of looking at the Syrian conflict through cable news, we could be on the ground, seeing how small bands of fighters with popular support can challenge Bashar al-Assad's better trained and equipped forces. We could better understand how groups of competing political factions, some hostile to the U.S. and some not, wind up banding together out of necessity. Players could get the sense that the cooperation between Islamists and secularists may only last until the rebels win, whereupon the various factions could easily fall to infighting. You like grim and gritty? You like "adult" plotlines? You like intrigue and betrayal and desperate post-apocalyptic settings? Then brother, have I got the conflict for you.

I've always held that FPSs can actually teach a lot through tangential learning. While players may not pick up Call of Duty to learn about World War II, they at least get an introduction to Stalingrad, for example, or the Battle of Peleliu. I'd wager that before the Black Ops series, most young Americans had never heard of the Bay of Pigs or the U.S. invasion of Panama. Planting seeds of real information in entertainment can yield big results down the road. No joke: I write about history because I watched Indiana Jones as a kid. When I was nine I decided I wanted to be like Indiana Jones, so I started reading all the ancient history I could find. At some point, it hooked me. I stopped reading history to be like Indy and started reading history because it was fascinating. That led to a history major, research overseas, and eventually starting a column where I sometimes discuss history in games - all of that because I saw Harrison Ford fistfight Nazis on top of a tank. Games can do that, but not just with time periods. They can interest us in new countries and cultures as well.

The problem with how games depict other countries right now, though, is that they're so interchangeable. In modern shooters, you barely get the sense of a place and its people before you plunge into another warzone in a hurried rush, usually during some disaster like a flood or sandstorm. Were this intentional, it would be a biting meta-commentary on U.S. interventionism, but instead it just comes off as turning third-world misery into first-rate entertainment. Do something about a place. Say something about a place. There's so much potential to let us see with different eyes, we just need to step out of our comfort zone and risk a little controversy. Let us walk into Iraq in the boots of the Kurdish Peshmerga, hunt Gadhafi as part of the Libyan rebellion or be part of a Peruvian unit squaring off against Shining Path. We've seen war from the American perspective, it's time to see something different.

However, possibly the most glaring issue with modern games about war is their fetishistic use of technology. While it's true that technology makes up a large part of the U.S. armed forces and it's an integral part of how industrialized countries wage war, its usefulness is extremely over-emphasized in games, and it creates the dangerous impression that superior technology wins wars - it doesn't. The United States has the most technologically advanced military in the history of the world, with trillions of dollars invested in computer guidance systems, cyber warfare, advanced rifle optics, body armor, nuclear submarines and pretty much everything you could possibly imagine to give us a winning edge. Despite this, we haven't decisively and permanently won a major conflict since World War II. Korea was a stalemate. Vietnam was a loss. Iraq and Afghanistan, though we've made some accomplishments, can hardly be termed unqualified successes.

Really, the most decisive wins were the small wars of the 1980s and 1990s like Panama, Kosovo and Desert Storm. Notably, all of these were quick in-and-out affairs with limited objectives, and now we see the wisdom of that strategy. This is not to disparage the U.S. military in any way - they're the best in the world and have tried their hardest in every conflict I've mentioned - but we've entered an era of world politics that makes it very difficult to unambiguously win a conflict. Because nuclear-armed states don't want to engage each other directly, they instead engage in grinding proxy wars and counterinsurgencies. These aren't the kinds of wars we fought in World War I or II where you can simply force an unconditional surrender then rebuild with a cooperative but defeated foe, you have to deal with sectarian bloodshed, the threat of civil war and non-functioning or corrupt governments. As a result it's very, very difficult to achieve strategic goals, and nearly impossible to walk away clean - even if you've got the best military hardware ever invented.

You cannot win a war by force of technology. It can help, but "Superior Technology" exists way down on the Great Big List of Things You Need to Win a War. It's probably somewhere around #20, well below "Adequate Supply Lines," and "Clear Objective," and far, far below "Local Acquiescence" and "Political Will." But those things are difficult to portray in a game, it's easier to simply have players level up and unlock a new set of body armor or a better scope to make them more effective - and in the context of the game, it does. But war isn't a round of team deathmatch -if it were, we would've won Vietnam hands-down. In reality, you can have the most highly-trained, well-supported, survivable and deadly ground troops on the planet, backed up by air assets and naval assets, but you'll still lose a counterinsurgency if you can't convince the population to trust you. This isn't WWII, where you can just batter a government into surrender and replace it without a decade of open, grinding factional infighting. After a dozen years of these conflicts the U.S. military has learned this lesson well, but I'm not sure it's trickled down to the public.