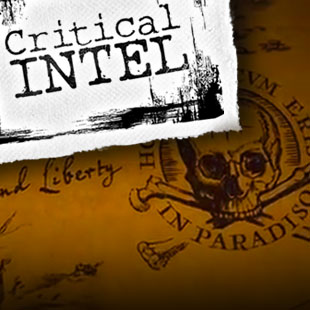 Naughty Dog has officially released a teaser for Uncharted on the PlayStation 4. However, if you're hoping to see Drake, Sully or Elena you're out of luck - instead, the teaser features an unknown voice actor swearing vengeance over an old nautical map of East Africa.

Who is this man, and what is he after? Is it Sir Francis Drake? An old associate Nate betrayed? That will remain a mystery for now. But the clues all point to one place - the pirate republic of Libertalia, the Mughal treasure, and possibly a hint of the mystical.

The island circled at the end of the trailer is the Île Sainte Marie, off the coast of Madagascar. During the 17th and 18th centuries, the island was a haven for pirates that preyed on European ships returning from India and Southeast Asia. Legend also holds that the island was part of a pirate republic known as Libertalia - and wouldn't you know, the republic's motto "For God and Liberty" caps off the teaser.

According to legend, pirate captain James Mission founded Libertalia (also known as Libertatia) as a pirate colony in the late 17th century. Mission began life at sea as a fervent Catholic and faithful officer on the French warship Victoire, but a visit to Rome changed that. Witnessing Vatican excess crushed Mission's faith, and he fell in with a radical ex-priest named Caraccioli who seemed the only one speaking out against papal opulence. The two became friends, and when Mission left, Caraccioli signed onboard the Victoire too.

But Caraccioli wasn't merely a lapsed Catholic - he was an outspoken Deist. He preached radical doctrines to his shipmates, including human equality, religious tolerance, abolitionism, and that aristocracy was a sham. "He fell upon Government," says Johnson's A General History of the Pyrates, "and shew'd, that every Man was born free and had as much Right to what would support him as to the Air he respired." Mission became the priest's most devoted convert.

These ideas might've remained academic if not for a twist of fate - months later the Victoire met the HMS Winchelsea off Martinique, and the ships mauled each other until the Winchelsea exploded in a magazine accident. Mission, the only surviving officer onboard, found himself at a fork in the path. He could either return to France, or as Caraccioli suggested, "Bid defiance to the power of Europe, enjoy every thing he wish'd, or reign Sovereign of the Southern Seas and lawfully make war on all the world."

Mission put the question to the crew. They chose the latter.

But Mission and his crew didn't consider themselves pirates - they saw themselves as sailing revolutionaries. Instead of a black flag, they flew a white one with lady Liberty painted on it to show they were "no pyrates, but men who were resolved to assert that liberty to which God and nature gave them, and own no subjection to any." Like many pirates they equally distributed prize money, voted on all decisions and had a measure of equality. Unlike pirates, they forbid swearing and drunkenness, outlawed capital punishment, and treated prisoners humanely. Most notably Mission and his crew were fervent abolitionists, with Mission declaring that he had not thrown off the yoke of his own slavery only to enslave others. Whenever the Victoire captured a ship carrying slaves, the crew would strike off the men's irons and take them aboard, then teach them French and absorb them as equal members of the crew.

After taking several prizes and intervening in an inter-tribal conflict in Madagascar, Mission decided that his crew needed somewhere to call home, retire and raise the families they'd started with native women. In accordance with his politics, Mission named the new colony Libertalia and its citizens the Liberi. The colony had full equality, no property distinctions, and citizens held all goods in common - a bit like a hippie commune, but with overwhelming firepower and a plunder-based economy. Eventually this anarchist commune proved too chaotic though, and Mission brought in other political ideas like real estate ownership, a democratically elected executive and laws. Mission was chief executive and his allied pirate captain, Thomas Tew, served as admiral.