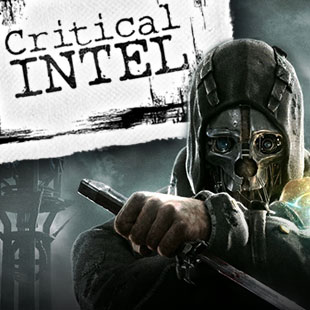 It's been well over a year since I played Dishonored, and I still can't stop thinking about it. The smitten city. The caricatured faces. The rotting Leviathans all stuck with me. But one thing in particular has kept nibbling my brain like a plague rat: the Outsider. By far the most intriguing character in Dishonored - if "character" is the right word, elemental force might be more appropriate-the game's screen text calls the Outsider "a figure of myth, neither good nor evil."

Well, I don't buy it. That impartial, "neither good nor evil" thing doesn't pass the sniff test. Not for a minute.

Examining the evidence leads to one conclusion in my mind: the Outsider is clearly Satan, or at least the closest thing that exists in Dishonored. He's no impartial arbiter, every step on Corvo's journey, the Outsider has his thumb on the scale. And since The Brigmore Witches DLC recently came out, I'm taking the opportunity to make my case.

Now understand, I don't mean that the Outsider is Satanic in the sense many people understand it today. He's not The Devil™. He doesn't rule over an underworld punishing wicked souls or fight a cosmic battle against the divine. He's not the Satan we're used to from the Book of Revelations and popular media. The Outsider's more an Old Testament version-a being, not necessarily evil, that tests men's souls. In fact, in the Book of Job where Satan has his best starring role, the name "Ha-Satan" is frequently translated as "the prosecutor" or "the accuser," a being that cross-examines human souls. In this story, Satan (operating under God's approval) tries to cause Job to curse God-and stacks the deck toward that outcome. He wipes out the man's wealth, kills his family, afflicts him with boils and, indirectly at least, causes Job's wife to plead with him to curse God and die. Nevertheless, Job holds true and is rewarded.

While this story is by no means the only appearance Satan makes, it's by far the most influential. After his appearance in Job, nearly every time Satan appears in religious texts or not, he's depicted as a deceiver who tricks people into selling out long-term spiritual fulfilment for short-term gain. Later Christian theologians re-interpreted Genesis to make him the snake that tempts Eve. The New Testament has him spirit Jesus onto a mountaintop and promise him an earthly kingdom. These stories entered popular culture through the German legend of Doctor Faust, who sells his soul in exchange for knowledge and magic. Themes of Satanic temptation have stayed popular over the years because they're so relevant-any procrastinator, chain smoker, or adulterer can relate to the idea that giving in to an urge today may have dire consequences tomorrow. The Outsider is a character in this same mold.

The first time I played Dishonored, I had one major problem with it: I couldn't play half the game. I was on a nonlethal run. It was a strategic decision at first-fewer bodies now, fewer weepers later - but my no-kill policy solidified after I slaughtered half a dozen Bottle Street gangers to protect Granny Rags. Seeing pistol shot blow their bodies apart and watching Corvo cut their throats felt wrong, even more so after Granny flashed me a cruel smile and directed me to her shrine to the Outsider. I wanted to protect an old insane woman, and instead I'd murdered men at her behest. Stealing away on the pipes, far above the streets, I tried to think my bloodstained conscience away. Bad men die badly, I thought. They were murderers, and deserved what they got. But it didn't wash. I wasn't a hero, I was a murderer like the Bottle Street boys. Nothing but another plague rat nibbling the city's corpse.

I didn't kill again. Well, that's not true. I killed the witch, the woman who egged me on to my first murder. The blood came full circle, as blood always does.

Gallery of the Day: 8 Video Game Sequels We'd Like to See in 2015 ffronw 27 Comments