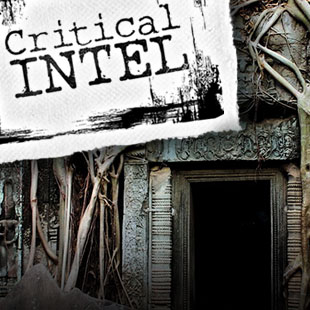 We walked there under a dark sky, my iPhone's flashlight lighting the dirt path. The day before the little LED had been enough to illuminate the staircases and bas-reliefs of Angkor Wat in the pre-dawn darkness, but here the jungle smothered the light. We'd been on the dirt path before, but that was in daylight when tourists choked the area and street children scuttled between them hawking postcards. But now it's 5:40 AM and my wife and I are alone-unless you count the mosquitos.

We saw the library first, a moss-covered structure as big as a village chapel. Its sandstone roof had collapsed, scattering suitcase-sized blocks around the foundation. Ahead, a building emerged from the shadows. First, a stone terrace. Silk-cotton trees erupted from the platform where ritual dancers once twisted in the delicate Apsara. Behind the trees, a tower-gate stood half ruined and leaning in on itself. Shaded galleries jutted out at either side, with another silver silk-cotton tree, thirty feet tall, sprouting from the roof-its roots dripped down the side of the building like a candle burned too long on a windowsill. The stone underneath is splotched green, like oxidizing copper. Bas-relief guardians stand at the doors, ready to repel invaders.

The king who built this temple called it Rajavihara, "the royal monastery." The French called it Ta Prohm, meaning "ancestor Brahma." But to the tuk-tuk drivers and tour guides of Siem Reap, it's "Tomb Raider Temple," famous for appearing in the 2002 Angelina Jolie film.

It's understandable why the location scouts chose to shoot here. The atmosphere is perfect. While the scene in question lasts only two minutes, it's pivotal for the film's mood. Lara explores the empty ruin, walking over fallen blocks and onto roofs as giggling children dart around the corners of her vision. Then, the ground opens and drops her into a chamber where she fights a living statue. It's - well, it's exactly what you'd expect from Tomb Raider.

For that scene to carry any weight at all, the temple itself had to look ancient, foreboding and magical. Ta Prohm fit the bill. It's impossible to see its moldering stones and not imagine adventure, or sense magic in the way roots grow geometric grids in the spaces between the masonry. It looks exactly like an environment from the games. But unlike a film set, Ta Prohm was not constructed. Instead, it became the perfect setting after an 800-year history of ambition, desecration, neglect and rediscovery.

Ta Prohm was the work of Jayavarman VII, god-king of the Khmer Empire, and it is by far one of his lesser temples. History remembers Jayvarman VII as the most prolific builder in the Angkor period. He built more structures than any other Angkorean king, and his ambitious public works program ushered in a new baroque style to Khmer architecture.

Jayavarman's most impressive achievement was city we know as Angkor Thom, an enormous walled enclosure with beautiful royal terraces and his grand temple the Bayon, its towers capped with enormous sandstone faces gazing serenely in cardinal directions. Angkor Thom was his masterpiece and love-a foundation stele describes the city as his bride. Though an excellent warrior and statesman, the god-king was an architect at heart.

Ta Prohm was not so grand as the Bayon, but this is not to say it was small. Ta Prohm served as the royal monastery, dedicated to a mix of Hindu deities and the Buddhist pantheon - something very rare at the time. Unlike his Hindu predecessors, Jayavarman VII was a Buddhist, and though neither religion is exclusive - even today they share divinities between them - Jayavarman pivoted the Angkorean state religion toward Buddhism and relegated Hindu deities to supporting roles. It was a change encouraged by his wife and his mother, both devout Buddhists, and perhaps it's unsurprising that each of Jayavarman's smaller temples were erected to gain merit for his family. The Temple of the Sacred Sword, Preah Khan, was dedicated to his late father. Ta Prohm was his mother's temple. Based on inscriptions, archaeologists believe that Jayavarman incorporated his parent's faces into the bodhisattvas that grace the walls.

Kung Fu Panda 3 - Is the Third Time the Charm for Fat Pandas? Marter 21 Comments
Comments on