I keep trying to figure out where bin Laden slept.

None of the beds look comfortable. There's no standout that might belong to a leader. One is inside the house, in a room with a rug and a mortar tube. Another - perhaps meant for a sentry, or for lying in the breeze during stifling Afghan nights - sits out on the patio. Tugs and sleeping mats fill a nearby bunker, where shopping bags hang on the wall for storage. An oscillating fan is the only nod toward comfort. This is one of the houses bin Laden used to plan the 9/11 attacks, but the man himself isn't at home. Even if he was, I couldn't shoot him because, despite the fact that the designers rendered this environment in the Quake engine, I have no gun. This isn't a game, but the BAFTA-winning interactive art installation The House of Osama bin Laden, currently part of an exhibition at the Imperial War Museum North in Manchester, and it's less about combat than it is about war, media and memory.

But before the house was an interactive display, it was a real building - one that the artists had to visit. After the outbreak of the War in Afghanistan, the British Imperial War Museum's Art Commissions Committee selected artists Ben Langlands and Nikki Bell, of artistic team Langlands & Bell, to create art that would access the emotional dimensions of the War on Terror. Already accomplished artists in 2002, the team had exhibited at the Tate, the Museum of Modern Art, and in cities across Europe and Asia - their art also explored aviation as a theme, making them especially suited to create work about the 9/11 Attacks. But despite that pedigree, their research trip to Afghanistan created a doubt they'd never encountered. "When we arrived in Afghanistan we were so shocked by what we saw it took us a moment to make sense of our priorities," said Langlands & Bell, in an email interview with The Escapist. "At first we wondered if it would be possible to make art." 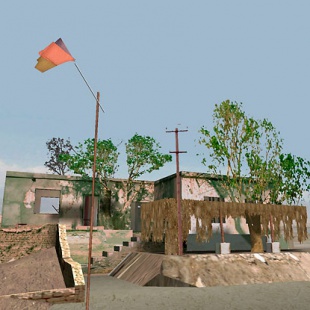 However, ever drawn to architectural forms, the team soon became interested in a compound they learned about through local contacts - high in the Afghan mountains near Jalalabad was a house bin Laden occupied in the late nineties. It was where he'd established his first training camp and lived when Khalid Sheikh Mohammed first pitched the plan that would topple the World Trade Center and provoke the U.S. invasion. The idea to map the compound took hold, but access proved a problem, since at the time a paramilitary group called the Hizb-i-Islami was using the site as a base. A major mujahedeen group during the Soviet War in Afghanistan, Hizb-i-Islami broke into various factions during and after the war, some of which allied with the Taliban. Today, some factions are a legitimate political party in the Afghan government, while others are considered terrorist groups by coalition forces. Both factions are Islamist and anti-western. Eventually, Langlands & Bell negotiated access to the site - but only for two and a half hours.

"We had to work very fast to take hundreds of photos, make notes, and pace out the distances within the compound," recall Langlands & Bell. But things turned sour as the paramilitaries became increasingly paranoid about the artists' activities. "As soon as we took out a tape measure the fighters in the house became agitated and we had to leave."