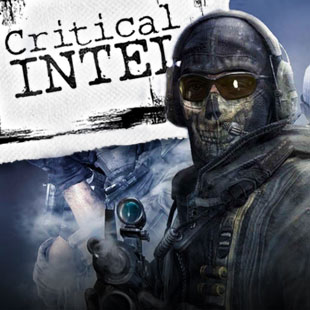 I recently caught up with Call of Duty: Ghosts.

That's an apt way to put it, since playing catch-up is all you do in that game. During my playthrough, I went through jungles and oil platforms. I rode atop trains and stalked across obliterated cities. I saw space.

Well, that's not true. I saw someone's back. But that person was in space at least. That's because Call of Duty: Ghosts tends to cast you as a supporting character. You're a follower, not a leader. Logan serves as muscle for the characters that matter - little more than a camera on legs. It's a frustrating design choice that limits the player's investment in the game and misunderstands one of the basic tenets of the U.S. military.

Critics have long knocked Call of Duty campaigns on their tendency to funnel players into scripted events. The series earned that criticism fair and square, but in previous titles those sections were interspersed into a greater variety of maps and were camouflaged by craftsmanship. For example, while "All Ghillied Up" from Call of Duty 4 is little more than a quicktime event where you walk rather than push buttons, the narrative tension disguised that fact. Plus, the more open maps in the rest of the game made up for the heavily structured mission, letting players feel like they had some input. Later titles also mixed up the combat by adding more weapons and gadgets, and Black Ops II experimented with branching storylines to give the player an illusion of agency. Ghosts doesn't have that variety or freedom of choice. It doesn't feel like an interactive world, it feels like choreography.

In Ghosts the hand-holding is so extreme that a player has little input other than who to shoot first - and with snap-aiming, you don't even get that. It's fitting that Ghosts tells the story of sons following in the footsteps of their father, since you spend most of the game in the footsteps of other characters, shadowing them like a henpecked intern. You step where they step, shoot when they tell you, and go where, and when, they tell you to go. Even in the infinite expanse of space and the depths of the sea, you tag along like a dog on a leash - and the game isn't afraid to give that leash a corrective jerk should you stray off course. Between limited cover and spawning enemies, going more than a few steps from your squad mate during the SCUBA and astronaut missions means choking on blood. This isn't for any narrative or gameplay reason, but to ensure you stay in a narrow corridor the game prescribes, even if veering from the path makes tactical sense. In the odd instances when the game allows you to crack a safe or knife a guard, you're doing so under orders - put this here, kill him now, breach this door - and each time the player character Logan silently complies. This is what it must feel like, I thought about halfway through the campaign, to be one of the squad mates in Rainbow Six: Vegas or X-COM: Enemy Unknown. Obeying orders on where to move, shoot and use gadgets. No, that's not right - those guys get to take point on occasion, they don't languish as tail end Charlie just so they can see their leader knife enemies to death in a "cool" animation.