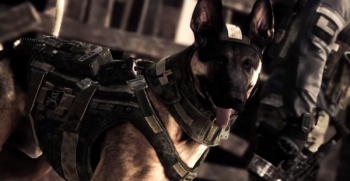 Infinity Ward created a game where the player is an NPC. Logan has no personality, no motivation and no place in the story except as an observer. His brother Hesh, on the other hand, actually has a character arc and all the important story beats belong to his character. Hesh begins as a civilian teenager, proves himself a competent operative and eventually goes from rookie to leading the Ghosts' most crucial mission. At the end of the game, it's Hesh that makes the pivotal decision to sacrifice the brothers' lives. And ultimately, Hesh is the one left standing after Logan - cementing the player's status as a secondary character - gets dragged off for brainwashing to presumably become the villain in the sequel. But story structure aside, the player isn't allowed to show any initiative in gameplay either. In fact, the first few times the player can scout ahead and devise their own tactics, they're playing as Riley.

Let me repeat that: in this game the squad's dog has more initiative and responsibility than the player character.

Those times when Ghosts does let you off the leash, play improves significantly and the game actually becomes fun. Stalking patrols in the jungle with a silenced pistol felt good, and setting up a defense grid with mines and turret guns allowed me to put a personal stamp on the proceedings, but immediately afterward the game yanks the leash again and you're back to nipping at the squad leader's heels.

What's particularly offensive about this enforced drudgery is that it's antithetical to much of the U.S. military ethos. While it's true that the military puts a great emphasis on following orders, the military's real obsession is leadership - and that's something Ghosts largely withholds from the player.

The principal of leadership, in a military context, goes beyond giving and carrying out orders, and instead becomes a values system that permeates military life. Leadership is a catchall term that can cover leading by example, communicating, being competent, innovating, keeping good character and even creating a positive attitude with peers. It transcends the chain of command, with privates and sergeants showing leadership as often as officers (some would argue more often). Leadership, in other words, means taking an active role in your duty, taking ownership over it rather than just doing it by the numbers. For soldiers in combat - particularly special operations units like the fictional Ghosts - this often means taking initiative and adapting on the fly to changing conditions. In Ghosts, there's little opportunity for that. Want to call helicopter support? Too bad, it's not the plot-appointed time. Maybe go around those SCUBA divers and hit them from the flank? No chance - the ocean is too narrow. And don't even think about taking cover and firing back when the rest of the team runs from enemy gunmen, or God forbid, run fast enough from a helicopter gunship that you overtake your team, because unlike them you don't instinctively know which cliff to jump off. If that happens it's better to lag behind and let them run ahead.