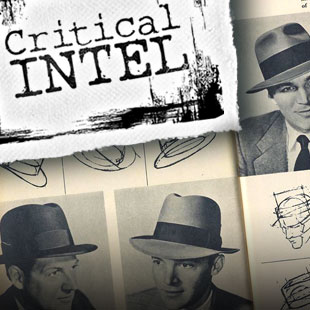 For all the jokes about game journalists and their fedoras, I can't actually recall seeing a colleague wear one. Oh, I'm sure they exist, and I've been to PAX enough times to have seen the odd snap-brim or trilby bobbing around in the wild, but even when the infamous Yahtzee visited Escapist Expo last year, his trademark Trilby seemed to stay at home (Though he briefly experimented with cat ears). But since the meme about nerds and their fedoras doesn't seem to go away, I figured the topic warrants enough public interest for a discussion - so screw it, let's talk about why nerds wear fedoras.

To understand the fedora's appeal, you have to go back to its origin as a costume piece in the 1882 play Fédora. Sex-symbol actress Sarah Bernhardt sported the hat in her title role, and on its debut the fedora became the new "in" fashion among young women. But saying the fedora started as "a woman's hat" ignores one crucial aspect - from the start the fedora represented assertiveness and more than a hint of masculinity. Sarah Bernhard liked to wear men's clothing, and she alternately scandalized and titillated Victorian audiences by playing male roles like Hamlet and, in a particularly incendiary production, Judas Iscariot. (In this version, Judas betrayed Jesus because he'd "stolen" Mary Magdalene, who was the lover of both Judas and Pontius Pilate. Seriously, read up on Sarah Bernhardt, she's awesome.) Due to the fedora's linking with a public figure who was assertive, sexually liberated and took on masculine roles, the women's rights movement adopted it as a symbol and from there it spread to women in general. It finally ended up as a hat of, after an advertising push, men in cold weather climates who needed a hat to keep the rain off them. From there the style became ubiquitous, but is especially associated with film stars like Humphrey Bogart and Frank Sinatra, and gangsters, who appreciated that the hat could withstand the elements while obscuring their faces. In other words, the hat went from being a symbol of coopted masculinity, to one simply considered masculine. While phased out of everyday fashion by the 1960s, it remained a staple of period films like Indiana Jones and a testosterone-boosting accessory for celebrities like Johnny Depp and Michel Jackson who don't fit the traditional masculine mold.

In other words, ever since its inception the fedora has been a symbol, though originally an inverted symbol, of what it means to be male. Men who wear fedoras tend to see it as a callback to an older age of style, but it's also a way to engage in fashion without appearing fussy - a reaction to an upbringing that more often than not told them that caring about their appearance or dressing in nice clothes made them seem a derogatory "gay." This coincided with looser trends in men's fashion through the '80s and '90s - decades where being a "suit" became another derogatory term, and dressing down connoted authenticity. While men in 1950s and 60s TV shows dressed impeccably, by the '80s the fashion-inept husband became a running gag. Meanwhile, office dress standards fell across most professions as Baby Boomers took the helm, to the point that even traditionally conservative professions like lawyers and news anchors stopped wearing ties. Casual dress might've led to comfortable work environments, but it also raised a generation of men who felt uncomfortable around fashion - now that's changing.

It's no accident that in the last decade we've seen an explosion of shows, from Mad Men to Boardwalk Empire that depict characters being fashion conscious while retaining their masculinity. Not coincidentally, these shows packed with tough men in snappy suits all take place in the past, with all the distance that affords. These shows provide an outlet for men who are interested in clothes, but retain the worry that this makes them appear feminine. Clinging to yesterday's most iconic hat is a way to assert fashion sense without worrying about public perception.

Unfortunately, wearing a fedora often has the opposite effect, coming off as a desperate grab at confidence by someone who doesn't know better.

Stolen Pixels: A Hat for Every Head Shamus Young 86 Comments