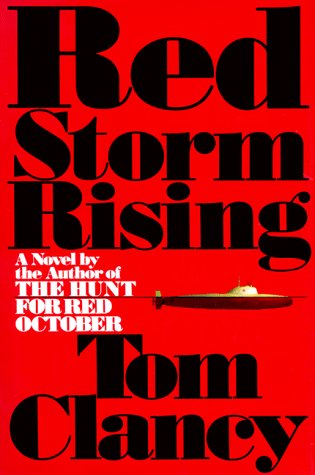 To say The Hunt for Red October was a hit would be like saying Jimi Hendrix played guitar. The book ruled the bestseller charts in 1984, partially because Ronald Reagan praised it in an interview. Clancy got a million-dollar advance on his next novel. Given that, Red Storm Rising was a risk. Rather than a Jack Ryan sequel, the novel was a sprawling procedural with an ensemble cast. There were artistic risks too. Before, Clancy only had to write an exciting and technically accurate novel, now he had to prove he wasn't a one-hit-wonder and establish that he deserved the mantle as the world's preeminent thriller writer. Red Storm had a lot riding on it - and now rather than tinkering for years, Clancy had to produce the book on a schedule.

For help, Clancy turned to Bond, who served as his reality check and apprentice. Clancy listed him as co-author, though Bond insists he wrote only about 1% of the book - his real contribution was helping Clancy form the plot, using his knowledge of Atlantic convoys developed from his years as a naval analyst. It was a mutually beneficial relationship. Clancy got Bond's expertise. Bond got to see Clancy at work, slamming out 10 pages a day, speculating about the holes in available information and on one occasion, crashing a Washington cocktail party to hunt down a Soviet defector and pick his brain about the Kremlin's internal politics. Bond benefitted from the tutelage so much that he later became a thriller novelist himself.

And as part of their research, they played wargames.

While writing Red Storm, Clancy intuited a top-secret detail Bond was withholding: Iceland's importance to Soviet naval strategy. If a war between NATO and the U.S.S.R. ever started, the Soviets would need to strike NATO convoys bringing troops and supplies from the U.S. to Europe. That would be a tricky proposition though, and require the Soviets to take Iceland both to neutralize the NATO fighter base defending the Atlantic and repurpose it as a bomber base for their campaign against the convoys. Clancy imagined this as a setup for a colossal naval engagement in the North Atlantic, pitting Soviet Backfire bombers against a NATO carrier group desperate to protect the convoys. It would be a sprawling, messy battle that would be hard to conceive of, much less write. "You've got literally hundreds of Backfire bombers coming in from the Northern flank of the Soviet Union," says Bond. "You've got three carriers, hundreds of NATO aircraft, dozens of ships, and it's just a big complex situation. And in my experience, you've got to bang the rocks together sometimes just to see how it plays out."

To understand all the moving parts, Bond wrote a Harpoon scenario called "Dance of the Vampires," to model the conflict. (The name came from USN tactical brevity code for antiship missiles, which show up as "V"s on radar.) The result was one of the most interesting wargames ever played, less a game and more a full-on military exercise.

The first thing that set the game apart was the players. In addition to Bond acting as referee, there was Peter Perla, Bond's old boss from the Center for Naval Analyses and author of The Art of Wargaming. "He's one of these scary smart guys," says Bond. "He has a doctorate in statistics and understands it." Former naval officers and professional naval analysts filled out the roster on each side. A former submariner, Bruce Spaulding, ran the Russian submarine force. Clancy served as the Soviet commander.

"Really he was one of the least experienced guys," remembers Bond. "But he was the storyteller, and he did have an amazing grasp of the strategy and the goals."