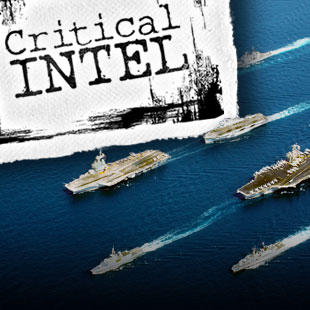 When you talk about how Tom Clancy changed gaming, you run into a belligerent mindset. According to gamer lore, Clancy was a businessman uninterested in games - an investor capitalizing on his famous name. Any legacy, detractors insist, is coincidental and indirect. This is mistaken. Clancy saw more in games than profit. He saw the potential of games as an analytical tool, a medium beyond mere entertainment that could express the world through play.

In this two-part series, Critical Intel will examine Tom Clancy's contribution to gaming, from founding Red Storm Entertainment in the 1990s to growing into a global brand. But our story starts long before that - in the 1980s - when Clancy first set out to conquer the world not with a powerful multimedia franchise, but a fleet of miniature ships and a wargame called Harpoon. Because before Tom Clancy changed games, games changed him.

Speculation ran rampant after Clancy published The Hunt for Red October. No one could figure out where he'd gotten his information. The rumor mill had it that he was an ex-spook, or a CIA plant hired to write pop-culture propaganda. Truth was, Clancy was an insurance agent with no military experience. He had excellent research skills and a keen mind for logical deduction, a man who could take two points of publically available information and logically fill the classified details in-between. Again and again over the course of his career, he'd predict top-secret programs and technologies, from the gradiometer used aboard the Red October to the importance of Iceland to Soviet naval strategy in Red Storm Rising. He even foresaw the potential to use airliners in a suicide attack, and in Teeth of the Tiger described a terrorist strike eerily similar to the one that took place at a Kenya mall last year. Some have dismissed this as simple imagination, but that doesn't give Clancy enough credit - he was a self-taught master at collecting public information, easily one of the best open-source intelligence analysts of our time.

Clancy's research for Red October pulled together every data set he could get his hands on, from Jane's entries to stories he collected from retired submariners as he sold them insurance. One of those myriad sources was a tabletop wargame developed by a former naval officer - and it would become more than research material.

"A game that I'd written, a wargame called Harpoon, became popular," remembers Larry Bond. "A guy named Tom Clancy bought a copy and used it as one of his data sources." He chuckles as he remembers it. "Good guy to buy your game."

Bond developed Harpoon, a miniatures game of modern naval combat, while serving as an officer on the USS McKean. Birthed from a highly technical wargame meant to study theoretical naval conflicts between NATO and the USSR, Bond developed Harpoon as a simplified, unclassified version that officers could use informally as a training aid. He published the game commercially shortly thereafter, and his work so impressed his superiors that they transferred Bond to the Center for Naval Analyses, a military think tank that used wargames to shape the U.S. Navy's Cold War strategy. Though Harpoon contained no classified information, Clancy noticed that it still contained valuable data like Soviet torpedo types, ship speeds and plain-language explanations for naval terms like convergence zones and passive sonar.

In 1980, Clancy wrote Bond a letter asking for further information on a few points, and the two began a friendship based on a shared interest in naval warfare.

According to Bond, Clancy was never to his knowledge a gamer in the traditional sense - he never saw Clancy play, or talk about playing a game other than Harpoon - but Clancy saw their usefulness as an analytical tool. "He immediately grasped the value and utilities of wargames, which some people don't. In the analytical community a lot of people misunderstand what you can do and not do with a wargame, and they try and use wargames to prove a certain point or advance an...agenda. That's not what they're for. A wargame has way too many variables. You play it once, luck drives everything. You play it a second time you start to see factors that repeat over and over again. You play it a third time you'll see those factors for real and you'll go, "Aha! This is a very important part of the battle." It turned out that understanding would play a large role in Clancy's second novel, Red Storm Rising, which depicted a theoretical clash between the Soviet Union and NATO.