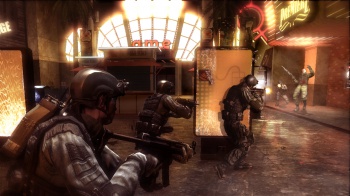 Rainbow Six marked the moment when Clancy stopped being a writer who'd invested in games, and started being a game brand unto himself. By the time Richard Dansky came to Red Storm in the late 1990s, Clancy was getting less involved with individual games and letting the studio run itself. The big man's departure left writers like Dansky the challenge of boiling down what made a Clancy book special and translating that into an interactive world.

"One of the great things about Mr. Clancy's writing was that it provided such very clear benchmarks," says Dansky. "So looking at a story or a character, it was intuitive to be able to say "this is Clancy" or "this isn't." The technothriller edge, the plausibility - all of our stories were of course heavily researched ... the emphasis on human skill and training as opposed to just relying on the tech, and the idea that there was a positive goal to what the Ghosts or Team Rainbow were doing." While game plots no longer came from Clancy and weren't tied to his novel releases, he still reviewed the games' stories for plausibility.

In August of 2000, Ubisoft purchased Red Storm Entertainment as well as the right to use Clancy's name as part of an expanded brand. Clancy's involvement, already cut down, became more advisory and Doug Littlejohns returned to England. Gamers have criticized the move ever since, claiming that in selling Red Storm, Clancy was putting his name on products that were at best an afterthought, at worst a cash grab. It's a simplistic presupposition that doesn't tell the whole story. "He was always interested in Red Storm," says Larry Bond. "I don't think he was a gamer per se, [but] he was interested in the games as quality products. He was interested in, obviously, their commercial success, but to say Tom was a gamer or not misses the point. Yeah he lent his name to the enterprise and that's only fair, since it was Tom Clancy's enterprise. Any of those games had his storyteller's input in it somewhere."

Indeed, the criticism that Clancy wasn't elbow-deep in his game series ignores two crucial facts: first, that he was a writer not a game producer. Researching and writing novels takes a great deal of effort, and Clancy couldn't devote time and energy to running a game studio. Second, by 2000 Clancy had already written two decades worth of novels for Red Storm to pull from, and would publish more books after that - meaning he was still ultimately the creative head, the north star for his larger brand and actively expanding the world. Tom Clancy wasn't at the helm of his game franchise because he was needed elsewhere - writing the novels that inspired it.

As Ubisoft took over Red Storm, Clancy games grew and expanded. The Ghost Recon series brought the tactical shooter to console audiences. Splinter Cell aimed to create a stealth series that would rival PS3 system-seller Metal Gear Solid. It turned out that Clancy's technology and process-focused novels - sometimes derided as technical manuals by literary critics - were a perfect fit for a medium that was also obsessed with gadgets, weapons and tactical advantage. While it's true the series has drifted from its more strategic origins, Clancy games have always held onto that extra layer of planning that set them apart. While other military games created follow-the-leader cinematic moments, Clancy games often put the player in the driver's seat and allowed him or her to make the decisions. It's notable that in a market where the term "licensed title" is shorthand for poor quality, Clancy games deliver consistently excellent adaptations the author's universe.