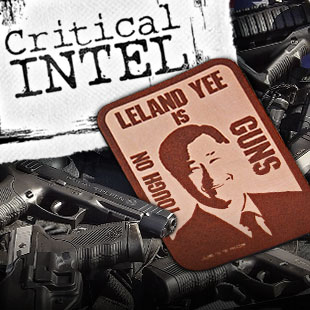 California State Senator Leland Yee was playing it down to the wire. He aimed to run for California Secretary of State, but couldn't announce until he'd cleared the debts he'd accumulated in the San Francisco mayoral race the previous year.

Yee finished fifth and was $70,000 in the hole, too far in the red to be a credible candidate. He was desperate to clear the debt, desperate enough that his longtime associate, former San Francisco School Board president and chief fundraiser Keith Jackson was turning to some unorthodox sources.

"We're going to put out a statement saying that we're going to run," Yee told Jackson in a November 20th phone call. "We're going to open the account Monday, and, um, and we're gonna start raising money for the Secretary of State. And your guys man, shit, they better hurry up because we met with that technology guy. Shit."

Jackson told Yee that he'd received the $10,000 campaign donation the previous day - a payoff for Yee exerting influence on behalf of a tech company. But there was another opportunity too, but he'd have to put a call in for Raymond Chow.

Yee had been expecting it. The day before, Jackson had said "our friend Raymond" needed some help. Whatever the details, Yee knew they'd be politically risky. Raymond "Shrimp Boy" Chow was a felon and a former Triad boss that had purportedly gone straight since his release from prison. But word on the street still painted him as the Dragonhead of the Chee Kung Tong, a Chinese community organization with a reputed sideline in organized crime.

Yee called Jackson back on his private line.

Jackson's contact agreed to pay Yee's remaining $5,000 worth of campaign debt if Yee put in a good word for Chow. Specifically, the contact wanted Chow's electronic monitoring device removed - though Jackson didn't say that. It was best to keep it vague.

Yee didn't like it. Chow was too high profile. He'd flaunted his criminal past in public, appearing on the History Channel show Gangland and openly talking about writing a book or landing a film deal about his life. "You know," added Yee. "Some people still think that he killed that Allen Leung guy."

Allen Leung was the Chow's predecessor as Dragonhead.

Two months later, the same contact offered Yee $5,000 if his office would issue a proclamation acknowledging the Chee Kung Tong's 165th anniversary. Because the honor was to a fraternal organization rather than directly to Chow, he argued, it wouldn't look dirty. That, Yee decided, was something he could do.

Five days after the meeting, and in the wake of the Sandy Hook shootings, Yee spoke to SFGate about videogame violence. "Gamers have got to just quiet down," he said. "Gamers have no credibility in this argument. This is all about their lust for violence and the industry's lust for money." Yee, you may remember, authored California's law criminalizing the sale of violent videogames to underage persons - the one that was struck down by the Supreme Court.

The hypocrisy is stark: an anti-violent games Senator privately doing deals with Triads while projecting concern for public safety and moral uprightness. Criticizing the lust for money while entering quid pro quo arrangements for campaign contributions. But that was only the beginning of Yee's descent into the underworld. It turned out that by striking that deal, Yee had crossed the Rubicon and entangled himself in a web of gangs, drugs, gun deals and corruption that would see him arrested and expose his public crusader image as nothing but lip service - because Jackson's contact wasn't a businessman from the East Coast, as Yee had been told. Neither was he a New Jersey mobster like Jackson thought he was. Actually, he was an undercover FBI agent and the lynchpin of a sweeping operation aimed at bringing down the Chee Kung Tong.

A word of warning: the information contained in this article comes from a affidavit filed by the FBI. Though the affidavit contains years of evidence gathered through wiretaps, undercover operations and informants, it must be emphasized that Leland Yee, Keith Jackson, Raymond Chow and any other figures mentioned in this article have not been convicted of the crimes described. Therefore, unless stated that the information comes from another source, assume everything in this article is what the government claims happened rather than necessarily a full and "true" version of events. None of these claims, as yet, has been tested in court, and Senator Yee's attorney has claimed that at this time he will be pleading not guilty.