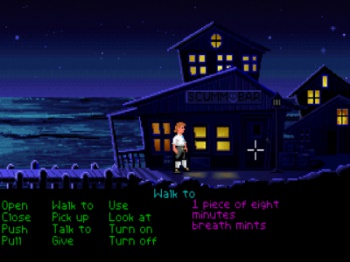 Popular culture tends to misinterpret marginalia as clever gags monks and commercial scribes slipped into the text while no one was looking, much like the phalluses Disney animators were (falsely) rumored to have smuggled into The Little Mermaid. In reality though, as pointed out by the marginalia blog Got Medieval, they were often supposed to be there, and in some cases were probably requested by the patron who ordered the book. (The Medieval period was a lot more ok with lewd humor in religious context than we are today - nudity and bodily functions were more public then.) In other words, rather than covertly added flourishes, marginalia are intended as funny and bizarre gags for the observant - exactly what modern Easter eggs are.

This tradition of hiding a nonsensical or humorous joke as part of a work became de rigueur once Hollywood dominated the film scene. Alfred Hitchcock famously appeared in all his own movies, usually in the background. But it was the Spielberg-Lucas generation that accelerated the trend in the 1980s and 1990s, falling all over themselves to reference each others' films. The creatures from E.T.: The Extraterrestrial appear in the Star Wars prequels. In Predator 2 the Predator keeps a Xenomorph skull in its trophy case. Indiana Jones punches up Shanghai gangsters in Club Obi-Wan in Temple of Doom and R2-D2 and C-3PO appear as hieroglyphics in Raiders. With such a hyper-charged Easter Egg environment pervading Hollywood, it was inevitable that Easter Eggs made the leap to games - where Lucas had a hand as well.

The first videogame Easter Eggs were largely hidden credits like Robinett's. The Donkey Kong port for the Atari 400 and 800, for example, shows the programmer's initials after a set of conditions so specific, it wasn't discovered until 2009. However, as technology progressed the Eggs themselves evolved too, from graphical jokes and callbacks to previous games to being full games themselves. Though many designers included secrets, LucasArts deserves a special mention for following their founder's lead and peppering their adventure games with sly references. In Indiana Jones and the Infernal Machine you can turn Indy into Guybrush Threepwood from Monkey Island, and find Grim Fandango's city of El Marrow on an ancient map. Monkey Island itself took a jab at LucasArts rival Sierra, while Full Throttle featured a brief cameo by George Lucas. In addition, nearly every adventure game the studio produced has a Sam and Max reference. But for sheer impressiveness, the winner has to be Day of the Tentacle which allowed you to play its predecessor Maniac Mansion in full using an in-game computer.

LucasArts adventure games didn't invent the Easter egg, but their heavy use of it made the practice both more mainstream and playful. By adding multiple secrets per game, they changed Easter eggs from a bonus to an active pursuit. More than mere extra content, they offered social cachet to anyone who found them - schoolyard bragging rights that set you apart from your friends. "Oh sure," you'd say to your friends. "You've finished Indiana Jones and the Fate of Atlantis, but did you see Indy make a Max shadow puppet in Monaco?" The secrets added a game-within-a-game quality to the play and marked their discoverers as having truly mastered the game. In a way, they're the more informal ancestors of today's Achievements and Trophies.

Today, Easter egg hunting has moved out of playground lore and water cooler banter and onto the internet, where it's morphed into a subculture all its own. Extensive wikis catalogue secrets by game, not only describing the Easter egg but how to get it. YouTube and social media has also brought a new dimension to the hunt, with studios hinting at extra content through Twitter and legions of hunters racing to capture it on video. At times these searchers can appear like Bigfoot investigators - plowing into the digital wilderness to chase rumors that someone saw a Sasquatch in GTA - but the payoffs can be spectacular. Witness, for instance, how DICE placed a Megalodon in Battlefield 4: Naval Strike that more than fulfilled the cryptozoology-like fervor the search engendered. But modern secret-hunters aren't limited to combing the digital desert manually - they have tools that would make their forbearers salivate. It's easier than ever to scan through a game's code and find hints at buried treasure, especially since emulators can reveal much that was previously hidden in old cartridge games. It's a testament to games' complexity that after three decades, we're still scouring the same fields.

Games weren't the first media to have Easter eggs, but their interactive nature allows players to search for hidden content in a way no other form of media can replicate. Whether an in-joke, a covert signature, an achievement or a friendly rumor, Easter eggs have been a part of gaming culture for thirty-five years and show no sign of stopping. As the infrastructure makes leaps in complexity over the coming years, we can be sure that the surprises will only get cleverer, better hidden and increasingly spectacular.

So kids, grab your baskets and line up along the rope - because the hunt's about to begin.