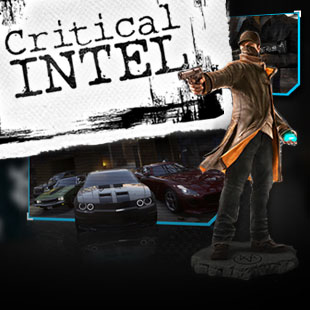 Exclusive Content. Special Edition. Collector's Edition. They sound so seductive, don't they? Like walking past the velvet rope at a nightclub. Like you're someone. We've all gotten used to these goodie boxes that live behind the GameStop register, but I've always felt a little uncomfortable about them. There are the issues of whether special editions are worth the money of course, and if they encourage publishers to gate off content, but what really gets me is the implicit rhetoric surrounding them. Collector's Editions and exclusive content treats customers like they need to prove their commitment to the company - when it should be the other way around.

To give an extreme example, let's look at the PS4 in Hong Kong. Unlike the Xbox One, the PS4 is currently available to the public here through legitimate sources - yet there's still a huge market for systems shipped in from overseas. That's because, due to shortages, the PS4 is only available at the Sony store in an exclusive bundle that includes Tomb Raider: Definitive Edition, Assassin's Creed IV, FIFA 14, and Call of Duty: Ghosts. The bundle costs HK$5,074, or around $654.

That's not much of a discount from buying all that separately. Add in that none of those games are PS4 exclusives and that one's a year old re-release, and this bundle doesn't look like a "deal" at all.

That's because it's not intended to be. From what I've seen, this stuff is all packaged separately, rather than in an exclusive box, meaning Sony could sell the PS4s separately but instead is using the PS4 shortage as an excuse to box Hongkongers into buying four games upfront. Games, I might add, that the customer may already have - or not even want - and doesn't even include the PlayStation exclusives like Killzone: Shadow Fall.

It's a way to hold the product hostage so consumers can only access it if they're committed enough to pay for it. Much like when former Sony chairman Ken Kutaragi suggested gamers would work more hours to afford the PS3, it's Sony giving its consumers a loyalty test based on enthusiasm. "We want people to feel that they want it," said Kutaragi in 2005, "irrespective of anything else."

Let's hope Sony execs figure out that this isn't a great strategy before they have to take another 50% pay cut.

Confused yet? I'll talk you through it.

If you want the Aiden Pearce statuette, buy the Limited Edition, or if you live outside North America, the Dedsec Edition. If you want his Vigilante mask, buy the North American Limited Edition. But wait! If you want the Vigilante mask and his "iconic cap," you better buy the Vigilante Edition (only available in Europe, the Middle East, Asia and Australia). Get Dedsec for the augmented reality cards and Chicago Map, or buy the UPlay Exclusive Edition for the best DLC lineup. 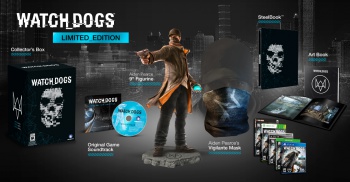 Oh, and beware - the Dedsec Edition doesn't come with the Dedsec Pack DLC. That's the one tricky bit. But no worries, it's available as part of the Season Pass!

And speaking of the Season Pass, it's the only way to access all the DLC - meaning that if you get it, you end up paying twice for DLC that came as part of your bundle.

None of this is new. For years game publishers have offered us special editions that were obviously designed as a way to further monetize a game by packaging plastic trinkets and glossy paper alongside it. It's merchandizing reverse-engineered from what we're used to. In other mediums you go see a movie or read a book, then buy merchandise based on whether you enjoyed the original product. With Collector's Editions, you buy your merchandise up front. It's the equivalent of buying a $30 ticket for X-Men: Days of Future Past and getting a Wolverine statue when you walk into the theater.

Most of the time, I have no problem with it. Sure, in another medium this would be sold separately, but if you want a sweet Titanfall statue along with your game, more power to you. What's different about Watch Dogs is how it slices up the DLC between different editions to create an illusion of exclusivity between different bundles, then in many cases makes you re-buy it anyway when you get the other missions through the Season Pass.