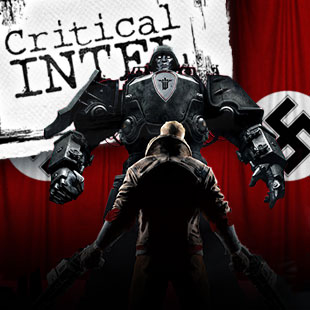 Last week we discussed how Wolfenstein: The New Order uses alternate history to make the player reexamine Nazism and World War II. And while The New Order generally elevates its pulp material to something more, I suggested that one aspect - the well-worn trope of "Nazi super-science" - still retains some troubling subtext.

In short: it gives the Nazis too much credit. The reality is that the Nazi war machine was no more technologically advanced than other countries, and in fact lagged behind on many fronts. In reality myth of German techno-terror was actually a joint creation between Nazi propaganda and, ironically, American popular culture like comic books and films. The actual Nazis, by contrast, were anti-intellectual, anti-science and - though they made some engineering breakthroughs - lagged behind in basic military technology.

German science and engineering were already famous when modern Germany formed in 1867. The region had some of the oldest universities in Europe, and by the First World War had produced several engineers and scientists so famous that their names are synonymous with their inventions: Gutenberg, Fahrenheit, Geiger, and the industrialist Zeppelin. The country's scientific stock rose further in the early 20th century when German scientists like Albert Einstein, Max Planck, Werner Heisenberg and Erwin Schrödinger redefined modern physics. They took top honors in other fields too - 14 out of the first 31 Nobel prizes for chemistry went to Germans.

With this legacy, it was little surprise that when the Nazis rose to power they defined scientific achievement as a pillar of the modern German state and character. The reason for this was twofold: Hitler badly wanted Germany to appear as a formidable modern state internationally, and domestically the notion of industry played well since it was synonymous with job creation - something that rarely happened in economically-depressed Weimar Germany. (Though the Nazi obsession with agriculture and resettling urban populations to the countryside often clashed with this aim - industrialization is inherently an urban phenomenon.)

Of course, there was also a third reason: Germany was quietly rearming, both overtly and in secret.

When Germany invaded Poland in 1939 and later overwhelmed Belgium and France in early 1940, they did so armed with new weapons and tactics developed in secret during the interwar period. One new strategy, known as Blitzkrieg, involved using tanks organized into "Death's Head" divisions that would punch holes in the enemy line and encircle them as slower units poured in behind, meanwhile the Luftwaffe would establish air superiority and carry out a terror bombing campaign. In both cases these units were more modernized than Europe had seen at that time: new Luftwaffe planes outperformed enemy counterparts and the tanks had heavier weapons and armor than Allied models, since at that time the Allies still saw tanks as infantry support rather than a shock assault unit. These early victories created a lasting image of the Nazi war machine as technologically superior - when in fact that was only the case because other nations hadn't spent as much on military readiness during the worldwide depression.

As the war progressed, Germany continued to create an impressive array of military technologies. There were the lauded Tiger and Panther tanks, the world's first jet-powered fighter and bomber, the first production helicopter, the only operational rocket-powered fighter ever made, the first assault rifle and of course their highly successful V-2 rocket and V-1 flying bomb. Other ambitious programs failed or never launched, including nerve gas, super-heavy tanks, directed energy weapons and submarines that launched ballistic missiles. But as the war dragged into its final years and German defeat looked increasingly certain, these feverish development programs served more as morale-boosting propaganda than tactical game-changers. Hitler continued to fund these so-called wunderwaffe, or "wonder weapons," essentially to create false hope in a German recovery - even as his generals complained that he was blowing their defense budget on what amounted to toys. In the end, the Allies were the real beneficiaries of all that research, since they scooped up Nazi scientists and technical documents after the war as part of the American Operation Paperclip and its Soviet counterpart, Osoaviakhim. The U.S. took those scientists - some who had experimented on human subjects -scrubbed their identities and put them to work on ballistic missile programs, aeronautics research and chemical and biological warfare. Several formed the core NASA team.

But interestingly, the myth of Nazi advanced science - originally a construction by party propagandists - gained a champion in its enemies' popular media. Seeking an enemy worthy of its superheroes and two-fisted pulp protagonists, American comics, films and fiction were only too happy to gain the Nazis as enemies du jour. After all, Nazis were perfect villains. Their uniforms were dark and covered with skulls and lightning bolts. They operated out of mountaintop castles. They did terrible things to civilians.

And as more accounts of Nazi human experimentation surfaced during the Nuremberg Trials, it was only natural to marry Nazis with the "mad scientist" archetype that had existed since Mary Shelley's Frankenstein. Now not only did these guys have advanced weaponry, they had done evil things to get it.

The result were innumerable Nazi villains like Marvel's Red Skull, the fictional Dr. Strangelove and even a Nazi moon base from Robert A. Heinlein's 1947 novel Rocket Ship Galileo. The Nazi super-science trope stuck, since it allowed authors to create villains that could be morally repugnant without explanation, and afforded them super weapons ranging from nuclear warheads to robots.

The problem, though, is that the idea of Nazi super science is complete hogwash.