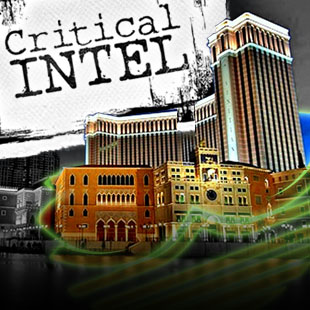 Macau is where Hong Kong goes to party, and in Hong Kong, partying means gambling.

Not that there isn't anywhere to try your luck in Hong Kong. There are the clattering tiles of the private Mahjong clubs. Hushed card games on folding tables, conducted under hanging wooden cages at the Kowloon Bird Market. The Happy Valley Racecourse, where club kids drink frozen Sapporo beer next to old men hunched over bet sheets, their worlds only intersecting as they scream for the same horse.

But none of them compare to Macau. Why should Hongkongers gamble small-time, when they can hop a forty-five minute ferry to the Las Vegas of Asia? Of course, since Macau out-earned Las Vegas by seven times last year, perhaps we should start calling Vegas America's Macau.

Macau, like Hong Kong, is a former European colony now given over to the People's Republic of China. And like Hong Kong, it retains its autonomy in all areas but diplomacy and the military. But unlike its more straight-laced cousin, Macau's former master was Portugal. Where Hong Kong is all high teas and Mind the Gap rush hour, Macau sports beach balcony seafood and ruined cathedrals. Then there's the gloriously crass casinos. It's like a Pacific Island and Monaco birthed a love child, then didn't raise it right.

The casinos are all name's you'd recognize. Wynn. Venetian. Bellagio. Their interiors look like cloned copies of their U.S. progenitors. The tone is different though. In Las Vegas, a dice toss or card turn throws up cheers or groans - the sounds people make when they're playing for fun. Here, it's less animated. More about money. Winners and losers alike lean forward with bowed spines and hands on chins. No one's watching the nearby stage where a girl group dishes out out K-Pop tunes to unpolished choreography. In China, luck is serious business.

Video slots provide the only exception. Loud, colorful, splattered with cartoon characters and thoroughly arcade-like, their magnetic joy drags you in. There the gamblers shout, clap, and cheer each other on. I sit at a machine called Ali Baba and feed in a twenty Hong Kong Dollar bill.

It's no secret that casino machines have learned lessons from video games. The hottest new slot machines in Vegas have customizable avatars, rumble seats, and can even save the gambler's progress - all in hopes that gamblers will develop a Candy Crush-style addiction.

The virtualization has been a long time coming. For years slots have had pinball-like bonus rounds and themed animation to make gambling on a machine look more warm and approachable. In Macau, I saw a half-dozen video blackjack players facing off against a virtual dealer. Female, of course. Pretty, of course. Technically she could've been anything - a robot, a gibbon, a sentient stack of casino chips - but when money's on the line, it's comforting to think you're betting against a fallible human rather than a computer, so they gave the calculator a face.

CHANCE marks where you win real money. A scenario lights up the video screen. Ali Baba might descend into the cave to fight thieves, loot treasure, or avoid booby traps. Success is totally random, but this time with visual consequences. The thieves line up above the wheel and for each CHANCE you land, you kill the thief standing above that dial and get his dollar value. The booby traps too, catch you if luck isn't on your side. Only one game mode actually lets the player make a direct choice - pick a path, one ends in a treasure chest, the other a trap. It's the same as a coin flip.

The randomness is legally mandated. Giving out money based on skill would privilege one player over another. According to the law, everyone must have the same chance to lose their money.

Every time I hit CHANCE, other gamblers left their machines to watch. I have good luck gambling, but only if the game involves no skill. I'll go broke in blackjack but clean up at roulette. I hit CHANCE four times, one right after the other. Each round, strangers gathered around to cheer me on in Cantonese, standing shoulder-to-shoulder with the friends I brought with me. They tell me "good job," like I have control what's going on, like it's me - not the dial - that killed the big thief that was worth the most money.

And here's the weird part: I feel like I did too.