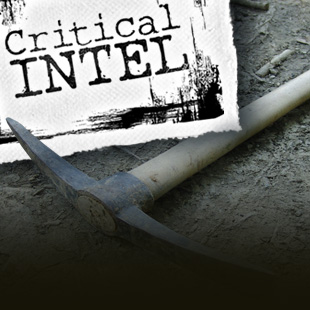 Joel, from The Last of Us is probably the worst apocalypse survivor ever. By the end of the game, he's carrying a rifle, a shotgun, an assault weapon, a flamethrower, four pistols, shivs, crafting materials and a backpack full of tools.

Joel can shoot his way through stampeding infected, but chain-link fences stop him dead. Faced with this impassible obstacle, he has to boost Ellie up and over or send her through a vent where she's exposed to danger. It seems an unnecessary risk. After all, it's the apocalypse, is anyone going to care if he snips a rusty old fence?

It's admittedly a little facetious to point out that Joel could've made his life easier with wire cutters (and some rope, while we're at it) but it demonstrates the conflict inherent in games right now: we can make worlds look convincing, but they still behave like videogame worlds - and most game worlds are still rudimentary when it comes to interacting with the environment. But as technical limitations fall and Minecraft-style building games increasingly carve out shares of the market, games may want to stray from offering more weapons and put more emphasis on the humble tool.

Because while weapons can only destroy, tools can destroy and create in equal measure.

Videogame worlds are nothing but papier mâché shells. Don't let anyone tell you different. When you're running across a rooftop in GTA or Titanfall, you're standing on a digitally-textured cardboard box - unless a programmer filled out the interior. Skyrim's mountains are hollow inside. Run through an alley in Call of Duty and you're dashing through the thin corridor where that world exists. The horizon, no matter how detailed, is an illusion. Most buildings are no more than Hollywood-style facades. For all the technology, most game levels are much like the top-down maps D&D GMs lay out on graph paper: outside of the boundaries is just empty space. Think that isn't true? Fall through the geometry and see for yourself.

In most games this passes without notice. Often you're playing in a setting where trespassing the geometry - prying open someone's window or cutting a fence, for instance - would be socially unacceptable and doesn't occur to the player. Action games, on the other hand, keep the player moving in the path of least resistance, using constant threat to funnel them through the world without telegraphing how controlled their path is. Some games, Assassin's Creed III and IV and Thief for instance, will offer the occasional open window or detailed building to give the impression their city's alive. The hope is that players will fill in the blank spaces with their imagination, thinking Well this house has things, in it, I bet the others do too. It's the power of suggestion, and it works - or doesn't work - to varying degrees.

Where developers run into problems is with post-apocalyptic games - especially those with exploration elements. Herding a player becomes more difficult if you're offering them the chance to take it slow in a deserted place free of consequences. That's when they start taking a closer look at why a door's blocked or debris renders a staircase impassable - and the game goes from lived experience to mere puzzle.

For example: at one point in The Last of Us Joel was worrying over the fact that they couldn't get past a fence and therefore had to explore a hydroelectric plant - but the problem didn't make sense in the world's context. Joel is a practical, risk-averse guy and he has tools in his backpack - why not cut that fence? Who's going to complain? Even without tools, it's not impossible to unseat a fencepost or even climb the thing.

In reality, this dialogue existed solely to solve a problem: that everything past that fence might as well be a matte painting. If Joel could cut fences and pry ducts away to find alternate paths, it would destroy the developers' ability to herd the player toward the next checkpoint and allow players to wander outside the world's geometry.

That's the storytelling reason. The technical one is that games don't have the processing power to enable broadly-applicable tools, and the best they can do is give players an item that works on one specific game element to open a limited, self-contained rabbit hole. That's what Thief and the Batman: Arkham series do - provide tools that gave the player alternate paths and the ability to access hidden areas, deepening the environmental illusion by selectively going deeper.