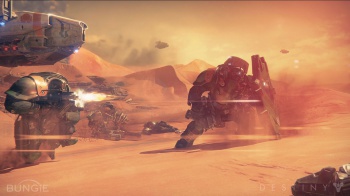 Terraforming opens up vast new ethical quandaries that we've never faced before - or have never faced on this scale. Is it ethical to terraform a planet with life on it? If we do terraform, should we try to accommodate or even aid existing life in its evolution? Are we, as proved by our custody of Earth, simply far too destructive to start changing climates another planet?

According to terraforming theorist Martyn J. Fogg, there are four major divisions in debates about the ethics of terraforming. Anthropocentrists think it's not just humanity's right, but its moral obligation to terraform other worlds, since it's a continuation of life adapting to and changing its environment to survive. Zoocentrists worry that not only will terraforming harm native life, but that any animals humans export will suffer, or undergo unnatural evolution on other worlds. Preservationists believe that planets should be left alone as nature created them, without any interference by man. Ecocentrists strike a balance between these, saying that all life - even microbial life - has value, and that for terraforming to be ethical, it needs to preserve native life.

As in all debates, these aren't rigid groups, but parts of a continuous spectrum. For example, Christopher McKay of NASA's Ames Research Center considers alien biospheres to have value, and holds that they shouldn't destroy them by terraforming. However, he also believes humanity could ethically terraform planets in a way that nurtures the life already there - both so we could observe and learn from new organisms, and so they could expand to create a planetary biosphere. "Mars is beautiful the way it is," McKay said in a 2004 debate. "But I think it would be even better if we could restore the biosphere that it once had. So I vote for life."

Anthropocentrists see this privileging of microbial life over human life is a threat to humanity's survival. After all, we will eventually have to move off this planet or die when the sun explodes - if not from some earlier disaster - and in that circumstance it will be our evolutionary imperative, they claim, to displace less efficient forms of life.

This, at least judging from the trailers, seems to be Destiny's tack: that humanity and our allies should conquer the solar system and drive out any alien forms of life that reside there. The underlying message seems to be that it's not only humanity's goal to spread across the stars, it's our destiny.

But of course, we'll have to survive long enough to encounter these questions, and at this point that's not a given. Our present terraforming challenge is how to balance the carbon ledger on our own world - indeed, it seems strange to talk about melting the polar ice on Mars centuries from now when we're seeing historically-low levels of sea ice on our own planet, in our own time.

If we don't tackle the accidental terraforming we've done on Earth, we may never plant a redwood on Mars. Even if the increasing climate extremes, famines and conflicts don't wipe us out, their impact could make us less economically powerful and unable to sustain the technological establishment necessary to send expeditions to other planets. After all, it was going to be a stretch money-wise even for a future human species at full strength, never mind one weakened via environmental stresses. Unless we take our pedal off the floor before reaching the global tipping point, it's possible we will have terraformed our own planet into a mass extinction.

At this point, just like in Destiny we may see our own collapse - and I doubt there will be a Traveler to save us.

Ethical Disclosure: The author has previously written for environmental groups including the Plasticity Forum and Mission Blue.