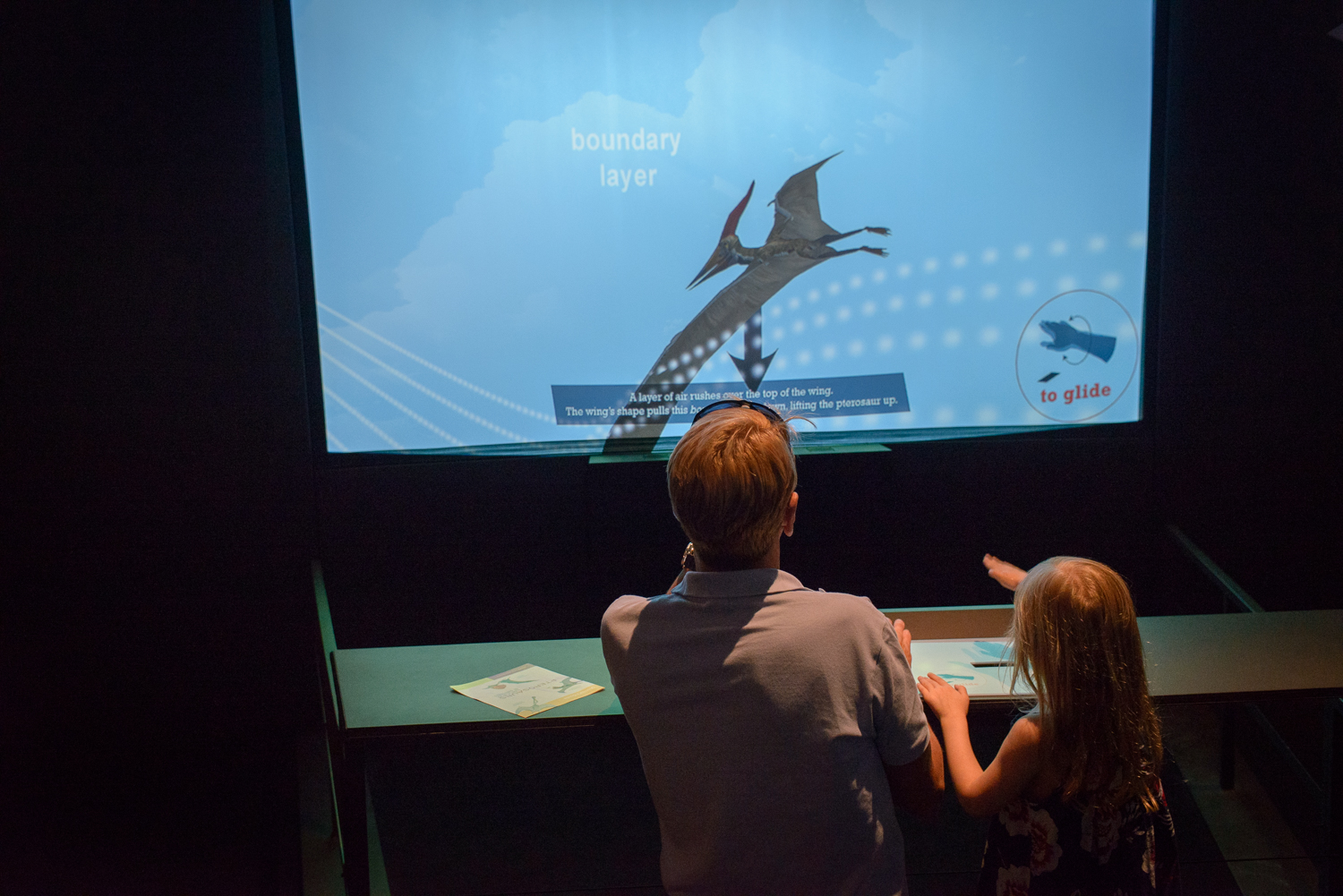 The Cretaceous landscape glides beneath me, small islands set in a shimmering sea. I flap my wings and soar higher, eager to pull out and get a greater view of this alien world. In the distance the sun sets.

I'm banking on a long glide when I see it - a splash in the water. I twist in midair, dipping by angle of attack into a shallow descent. There, again. Flashing scales below. I fold my wings and dive, dropping over a hundred feet. My Pteranodon longiceps hits the water like a cruise missile and bobs up, a fish in his toothless beak. The kids standing behind me cheer and say it's their turn. I step away and let one replace me in front of the Kinect.

This is Fly Like a Pterosaur, an educational game at the heart of the American Museum of Natural History's new exhibition Pterosaurs: Flight in the Age of Dinosaurs. And while the game's an impressive achievement in itself, it also embodies the emerging role games and interactive technology play in museum education.

Pterosaurs is a cutting edge exhibition in every sense of the term. In addition to the Kinect game, the exhibit - which runs at the American Museum of Natural History until January 4th - mixes films and iPads with the more traditional dioramas and fossils. These interactive displays aren't the science-themed playscapes of decades past, they're exploratory nodes that reinforce specific educational objectives. Each station sheds light on the creatures that are often glossed over as "flying dinosaurs," but in reality were so much more.

Pterosaurs weren't actually dinosaurs, but a taxonomical subset of their own. These flying reptiles represented a massive evolutionary leap - the first vertebrates to take flight at a time when insects were the kings of the air. They varied in stature from the duck-sized Jeholopterus to Quetzalcoatlus, which had a thirty-six foot wingspan and was larger than a single-engine airplane. Some had incredible crests that may have helped them steer in flight. Indeed, pterosaurs evolved into sophisticated flying machines, and that's exactly what the AMNH wanted to communicate through games.

Fly Like a Pterosaur is the brainchild of Hélène Alonso, the museum's Director of Interactives and Media. Ms. Alonso's job, broadly, is to find novel ways to hook visitors through technology and play - and pterosaurs posed a unique challenge when it came to explaining how anatomy influenced physics.

"We needed to convey the complexity of aerodynamics by comparing two different species of pterosaurs which, given their differences in anatomy, encountered different flying challenges," Alonso said via email. The resulting game takes up three exhibit stations. The first functions as a tutorial, asking guests to stick their hand in a simulated wind tunnel and bank it back and forth, demonstrating how an airfoil works, how the high angle of attack influences lift, and how flapping wings create thrust. The second station puts you in control of the hyperactive Jeholopterus snatching insects in the forest. In the third, you take on the stately, gliding Pteranodon. All three games were developed in-house and powered by Kinect - you control the Pterosaur by standing in front of a camera with your arms outstretched, wheeling, flapping and angling your body to stay aloft. "We wanted to provide a realistic experience which facilitates learning," says Alonso.

And the exhibit does an excellent job. The aerodynamic and anatomical differences between the two pterosaurs - which might appear abstract on the page - emerge immediately during play. The smaller Jeholopterus proves much harder to control. Its small wings require you to flap constantly like a bat, which makes it maneuverable but erratic. The Pteranodon, by contrast, glides and plunges like an albatross. "Each game showcases the advantages and difficulties of both environments and the resulting adaptations in the pterosaur species," Alonso said. "Smaller pterosaurs lived in forests which had dense environments which required lots of tight maneuvers. Bigger pterosaurs lived in wide open spaces that were easier to fly but required traveling over longer distances."