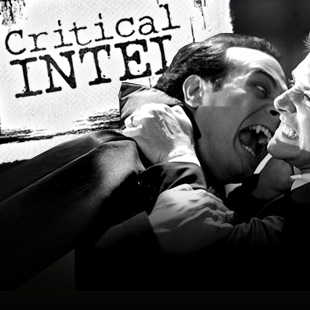 Vampires are mythology kings -- a creature so buried in our consciousness that a mere mention draws up a picture in our mind's eye. But here's the thing: they don't really scare us anymore. You find bloodsuckers on cereal boxes, on Sesame Street and in romance novels these days, rather than in the tomb. How did it get this way? How did a blood-drinking servant of evil turn into pretty boys and Muppets? The answer lies in what vampires originally represented, and how our current culture has kicked the legs out from under those old fears.

All horror deals in metaphor, and monsters most of all. Every great horror story has roots in real-world anxiety, whether it's fear of contamination, attack or a threatening social situation. The Shining is a haunted house story, but it's really about living with a violent alcoholic. Werewolves represent man's violent nature. Vampires, on the other hand, have been malleable, and that's why they've lasted. In an area when Eastern Europeans herded sheep and traveled on foot, the shape-shifting Strigoi spoke to the terror of being stalked by wolves. Later, vampires came to represent human greed -- the wish to consume scarce resources. Their corpse-like bodies horrified peasants who lived in dangerous times, a reminder that they too would one day join the dead. After Bram Stoker's Dracula imported the blood-drinkers to western Europe, vampires came to represent the sexual urges and vices Victorian society repressed. Their graveyard aesthetics also dovetailed with the rise in embalming, expanded funerary rituals and cultural hysterics over premature burial. But when they exited their Gothic phase in the mid-to-late 20th century, vampires changed. They were more human, less monster, and lost their potential to scare and unsettle us.

What happened? Well, vampires outlived their usefulness as a horror story. The world moved on, attacking and dismantling the societal anxieties that gave the myth sting. They still remained in pop culture, of course, but they weren't the terrifying demon they once were.

One reason vampires lost their bite is that we've undergone fundamental shifts in how we bury our dead. Indeed, bury may not even be the proper terminology anymore, since cremation and ash scattering now make up around 40% of American funerals - and what are vampires without tombs, coffins, and grave dirt? Death was also much closer to people in the past than it is today. Until the mid-20th century when hospitals and hospice care gained more ground, people generally died at home and stayed there post mortem, with the mortician even embalming them in the house. Funerals and wakes likewise happened at home, with friends and relatives sitting vigil with the deceased until burial. Death involved contact with the corpse, as opposed to today when we immediately whisk bodies away for cremation or burial preparations, only seeing the deceased again in a sanitized (and increasingly rare) open-casket funeral. Reanimated corpses seem less horrifying and immediate to us in the modern world because we have fewer experiences with actual corpses. Death and dying became a less intimate, more medicalized experience.

But this medicalization of death is peanuts compared to how we've medicalized disease. Though science educators may cry foul over the public's continued lag in scientific knowledge, compared to our ancestors we're pretty advanced in our understanding of infection and outbreaks. In the not too distant past, humans were still blaming epidemics and disease transmission on the supernatural. In 1892, townsfolk in rural Rhode Island exhumed and desecrated the body of Mary Brown, believing the 19-year-old was an undead fiend visiting tuberculosis on her family. This wasn't an isolated case, either. Tuberculosis fears spurred multiple grave desecrations in 19th century America in what historians now call the New England vampire panic. But after a century of mandatory public education, average citizens better understand disease transmission. Anyone suggesting -- for example -- that recent Ebola and Bird Flu outbreaks are a result of vampires would be rightly written off as a crackpot.