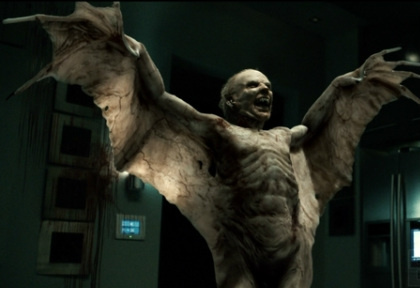 And that's the problem: because modern vampires dispense with damnation, there's now no reason not to become a vampire. After all, they're immortal, eternally young, have supernatural powers and sexual virility -- those are appealing qualities to a culture that fears aging and powerlessness. Removing damnation from the equation removed the price of admission to everlasting life. We might not sweat the sheets thinking about our immortal souls, but we still fear death.

It's no wonder that modern vampires generally serve as heroes nowadays. Medicalized, stripped of their monstrous side and given a safe supply of blood, they're really just The X-Men with fangs. These days, we fetishize and identify with Vampires more than we empathize with their victims, meaning they've ceased to be monsters.
And there's nothing wrong with that, really, since vampires seem more popular than ever - but it puts a stake through the heart of the vampire as a horror figure. If we want to make vampires scary again, we need to adapt them to modern fears - and to an extent that's already happening.

Take the under-appreciated Daybreakers, for instance, which used blood thirst as a metaphor for post-industrial worries like oil dependency and industries more concerned with profit than human welfare. Let The Right One In preys on the fears and conscience-less acts of childhood. Anne Rice's novels focused on the then-taboo subject of homosexuality. Even Twilight -- while I can't say much good about it - successfully resurrects the sex-as-death metaphor that appeals to its demographic, if no one else. (What can I say? Sex is a little scary to teenagers.)

But is there any way we could further redeem the vampire as a terrifying bloodsucker? How could we sharpen its fangs a little?

One option would be to go the Daybreakers route and use vampires as an environmental metaphor, a creature with insatiable lust that destroys whatever it feeds on, that damages and drains everyone merely by existing. Another would be to take the vampire back to its more magical roots and bring back its shape shifting abilities, letting it impersonate other people - a potent worry in these days of identity theft and the personal propaganda of social media. Vampires could also serve as a stand-in for novel viruses like Bird Flu, pathogens that exist on the edge of our understanding.

Or perhaps we should get away from the familiar and delve deeper into the lesser-known vampire myths from Asia and the Middle East. There's precedent: Dracula was originally an eroticized Eastern vampire. There's a whole subclass of vampires - from the Hebrew demon Lilith to the Filipino Aswang - that specialize in targeting children, a fear that's still present today. (The Aswang slips its long prehensile tongue into windows at night and drains the amniotic fluid from pregnant women's wombs.) Hong Kong horror film Rigor Mortis featured the Chinese jiangshi as an allegory for being unable to let go of a deceased relative. Del Toro's Cronos ties vampires in with our obsession with staying young. The key is to find a less-familiar setting for the horror and an anxiety to hang it on in the absence of damnation.
Of course, it may be that the vampire is simply an outmoded monster who will never again have the power to terrify us like it used to. If that's true, there's nothing wrong with it taking its place as a pop culture figure, enshrined as a classic monster but not serving its original purpose - a mint-in-box toy we admire, but don't play with.
Or it may rise from the dead. Because that's what vampires do.