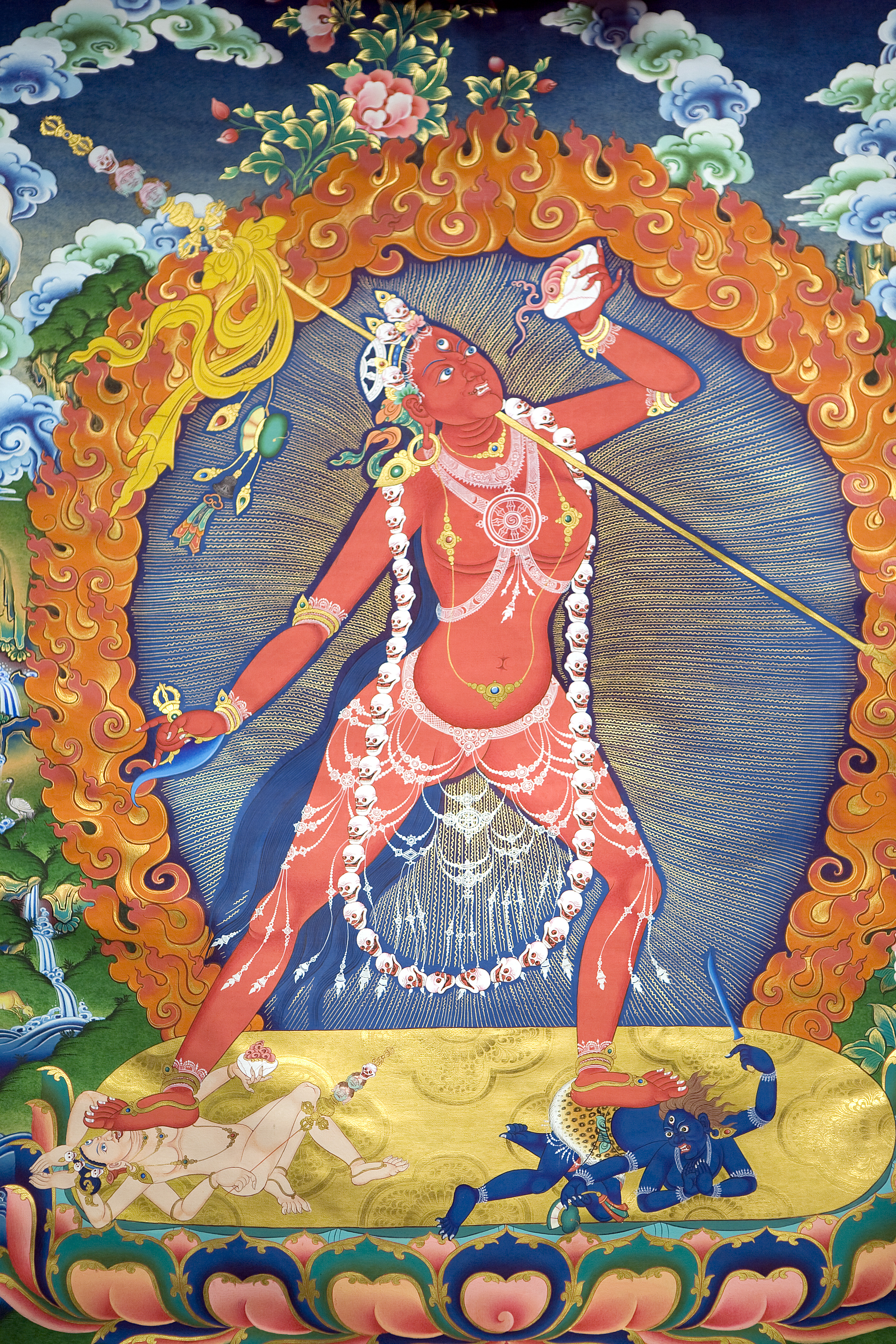 The young lady was repulsed, but knew she couldn't outrun the ghost. Instead, she asked to be excused so she could relieve herself. At first, the ghost resisted, but relented when the young woman offered to tie one end of her girdle to the fig tree. Slipping into the bushes, the young woman undid the girdle and began to sneak away.

"Come my child," said the ghost. "You haven't finished yet."

"I'm almost through," said the young woman, moving slowly so the ghost would not hear leaves crunch beneath her feet. "I'm coming back."

There was a disdainful silence as the woman crept away into the darkness. Then she heard the ghost call, "Rice, rice, where are you now?"

"I am here!" replied the bloody rice in the terrified woman's stomach.

The woman ran, the ghost howling after her. When she could feel the crone's breath nearly on her neck, she took a copper coin from her pocket and touched it to her head as an offering to the goddess Vajrayogini. Praying for protection, she dove into a rice field along the village road.

"Rice, rice, where are you now?" yelled the crone.

"I am here," responded grains of rice across the field. The crone plunged into the field, but could not find the crafty woman.

At dawn, a farmer found the young woman huddled in the field, shivering. The rice was trampled flat all around her, but the crone had never found her victim. The farmer took the young woman back to her parents, who told her she never had to go back to her worthless husband in Kathmandu

To walk through Nepal is to understand why it's known for elusive creatures and hidden cities. Mountain paths are narrow and winding, often passing through dense forests or squeezing between massive boulders. It's possible to come upon a town without realizing its there, or have traveling companions disappear around a bend in the cobblestone road. You don't see horses thundering down the path until they're nearly on top of you, and the animals - more adept at scaling mountain slopes than humans - only allow a traveler brief glimpses. Mountains soar above you like frozen temples. In this environment, it's easy to see how people might believe that ape-men lurk around the bend or that an undiscovered city lies over the next ridge. 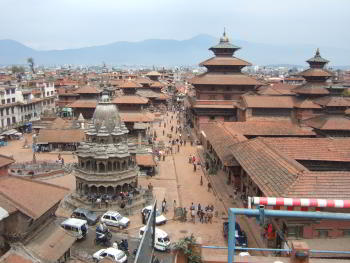 Kathmandu too, is a place of ghosts. From the cremation smoke on the black-watered Bagmati to the great stupas washed white and adorned with prayer flags, the city crackles with spiritual energy. But turn a corner out of the public eye and you'll find something unusual. Empty temples looked after by police with submachine guns. Antique shops that invite you through locked doors to see sacred objects from Tibet -things that feel like a violation to even look at. Palace bas-reliefs so real, the king defaced them when the queen claimed that they came to life.

And the old beliefs are never far away. In Kathmandu's arts district of Patan, I met a shop owner from the metalworking caste. His family specializes in making ritual objects for Buddhist practice - especially the triangular phurba daggers used for meditation, ritual and exorcism. They supply Buddhist priests in the region and even sell six-foot phurbas that monks bury to consecrate holy ground. Some daggers had previously belonged to priests and bore scars of those mystical battles.

As I picked up one dagger, the shop owner nodded.

"Iron," he said. "Very conductive for spiritual energy. You can feel it, can't you?"

I could, but to be fair, I'd felt it the moment I stepped off the plane.

You need not look for spirits in Nepal -- they find you.