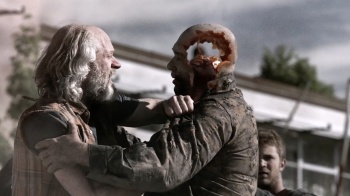 In any case, Vodou adherents don't so much fear zombies as they fear being turned into one. Zombification cuts them off from the afterlife, preventing their souls from joining the ancestors. This thought was particularly horrific to Haitians in the colonial days, who looked on death as synonymous with emancipation from slavery. It was thought that after death, the ti-bon-age would return to Africa where it could flourish in the land of the ancestors, no longer having to suffer the toil, terror and degradation of the sugar plantation. Zombification stole that hope, carrying the drudgery and oppression of slavery into the afterlife. Given this zombie-as-slave metaphor, it's no wonder that Vodou priests and priestesses would frequently call on Baron Samedi to protect their dead from the bokor, and would even go so far as postmortem mutilation to keep loved ones safely in their graves.

Much like the Yeti, zombies are a fairly minor part of Haitian culture, but one that appealed to American and European visitors. Their mixture of ghoulish imagery, exoticism and magic turned zombies into a cultural fascination overseas - and landed them in Hollywood.

William Seabrook's 1929 book The Magic Island first introduced zombies to the outside world. Seabrook was an interesting character in his own right, who lived a life somewhere between a Lovecraft protagonist and Gilderoy Lockheart from Harry Potter. Traumatized by his service during World War I, Seabrook joined the Lost Generation in Paris and spent the rest his life pursuing and writing about mystics and the occult. He spent a week with Aleister Crowley in 1919 and had a lifelong fascination with Satanism, summing up his thoughts on the matter in his book Witchcraft: Its Power in the World Today. By 1924 he was traveling across Arabia to study with mystics and write Adventures in Arabia: Among the Bedouins, Druses, Whirling Dervishes and Yezidee Devil Worshipers. In the early 30's he flew across the French Sudan to Timbuktu in order to collect a mass of historical documents about the city from a defrocked monk (Air Adventure and The White Monk of Timbuctoo, respectively), and when committed to a mental asylum in 1933, wrote a bestselling book about the experience (Asylum). Notoriously, after staying with a tribe of cannibals in West Africa, he became so curious about the taste of human meat that he obtained a fresh sample from a cadaver at a Parisian hospital, recounting its taste in his book Jungle Ways. (I will omit his rather, ah, detailed description in case some readers are on their lunch hour. But if you must know.)

Seabrook's travelogues of the bizarre and exotic thrilled the public, but it was The Magic Island's tales of the zombie that remains his lasting cultural impact. While the book proved popular, it was the loose film adaptation, White Zombie that cemented zombies into the public consciousness. Produced at the height of the Universal monster renaissance, the film starred Bela Lugosi as Murder Legendre (yes, really), a magician who uses Haitian magic to zombify the local population as plantation labor. When a young couple visits the plantation, Murder turns his powers on the young lady in order to deliver her to the plantation owner as a compliant wife. The zombies in the film were very much racial others, constructed as frightening both for their blackness as well as their association with African magic. Tribal drums pound over the title credits, and they perform manual labor with blank eyes. Later imitators like King of the Zombies and I Walked With the Zombies imitated these "African magic" motifs, with zombies and Haitian magic acting as a "foreign threat" especially targeted at stealing white women. It was where the zombie would stay until George A. Romero turned the genre on its head in 1968.

The Night of the Living Dead completely reworked the zombie myth. No longer connected to magic, the zombies in Romero's classic are atomic horrors brought about by a radioactive satellite. Their mob mentality and (at the time) extreme gore set them apart from their forbearers - and of course, by starring a black man the film reversed the usual standard for the genre, where people of color were always servants or mindless automatons.

But this genre shakeup happened because Romero didn't, at the time, think he was making a zombie movie. During Night of the Living Dead's production he never called them zombies, instead referring to them as "flesh eaters." Likewise, his inspiration for the creatures wasn't earlier zombie films, but Richard Matheson's novel I Am Legend, where a vampire plague sweeps humanity. It was only retroactively that fans branded Romero's flesh-eating monsters with the Z-word, and he relented for the sequel Dawn of the Dead, when he realized there was no fighting the cultural tide.

The irony was that the term "zombie" was a misnomer - these new sci-fi horrors had nothing in common with even Hollywood-style Haitian zombies apart from being a mindless corpse. But still, the die was cast and the zombie would never be the same.

Zombies continued to evolve. 1985's Return of the Living Dead established the creatures' appetite for brains. 28 Days Later and the Day of the Dead remake brought fast zombies. Videogames continue a constant flesh-and-bile arms race to fashion deadlier and more interesting walking dead. Able to stand in for a myriad of modern anxieties, for now it seems the 21st century belongs to the zombie. It's no longer a folk being, but a techno-horror.

But if you run out of shotgun shells, maybe give Baron Samedi a call.