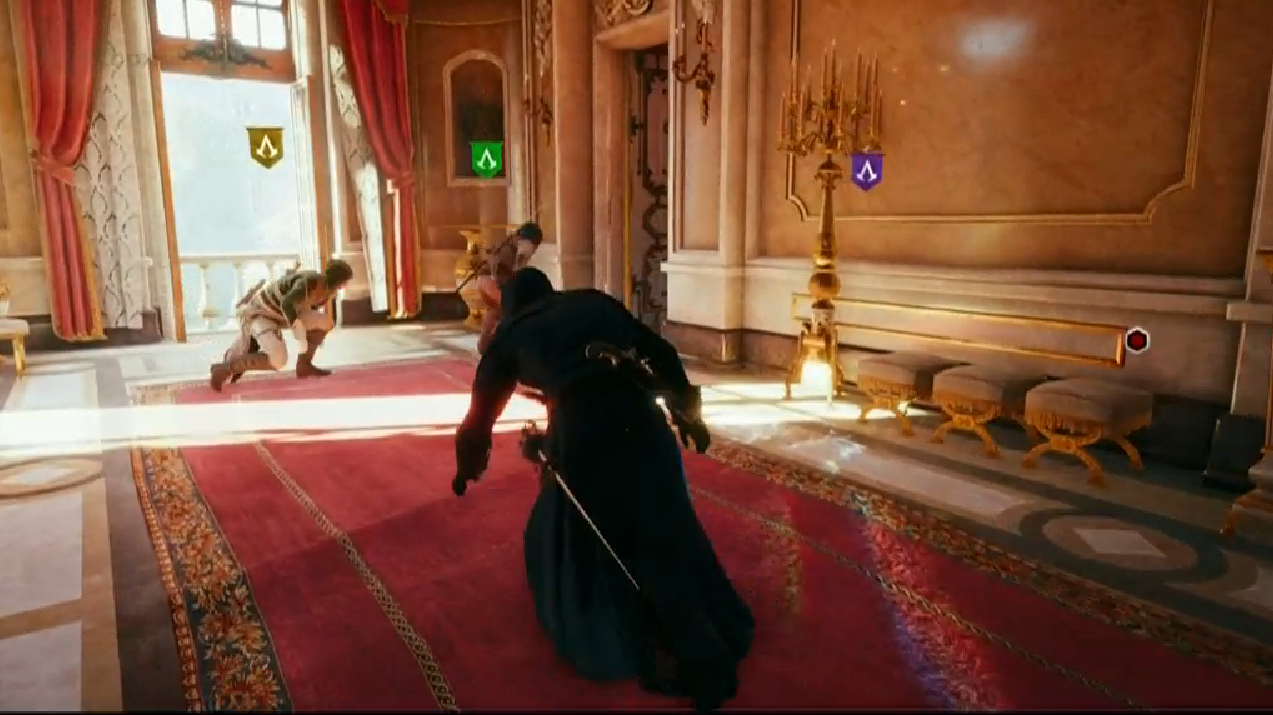 Take a stroll through the city and it's clear that the team really cared about fashioning an accurate and convincing illusion. In fact, city's depiction is so good that at times it falls into the uncanny valley or feels that much more marred by its glitches. The street scenes lose their luster when hats or socks spontaneously appear on citizen's heads, and after seeing the same crowd burning effigies day after day, you wonder if they ever go home. Still, I find it hard to fault a development team who clearly cared too much rather than too little, and perhaps had more ambition than they did development time.

Much like Black Flag, Unity expresses the period through play as well. The game uses public violence, for example, in a way that fits well with the period. From street brawls to assassinations and sword fights in front of crowds, the game clearly understands the Revolution's idea of violence as a performative rhetorical tool. But the best example is how Arno moves.

The French Revolution was primarily a class struggle, and the developers use the game's verticality to emphasize this through movement. The game's newly open windows provide more opportunities for item hunting and escape, but they also give class commentary on the city. Generally the higher you climb, the nicer apartments get. A wheelwright's shop on the first floor might have a sitting room on the second, with subtly more expensive furnishings. An unkempt bed and hanging laundry may give way to dining tables and paintings as you rise, communicating the city's class divisions. Likewise running across the rooftops from one district to another will speak volumes about the city's haves and have-nots. The arched roofs and wide avenues in districts like Cité and Versailles not only look different than the shantytown slum of la Cour des Miracles, they physically influence how you move around the architecture. The latter's broken and crooked, with lines-of-sight cut off and difficult to navigate. You feel the destitution and fear there through gameplay, and when you climb you can literally ascend above the streets and look down on the rabble. 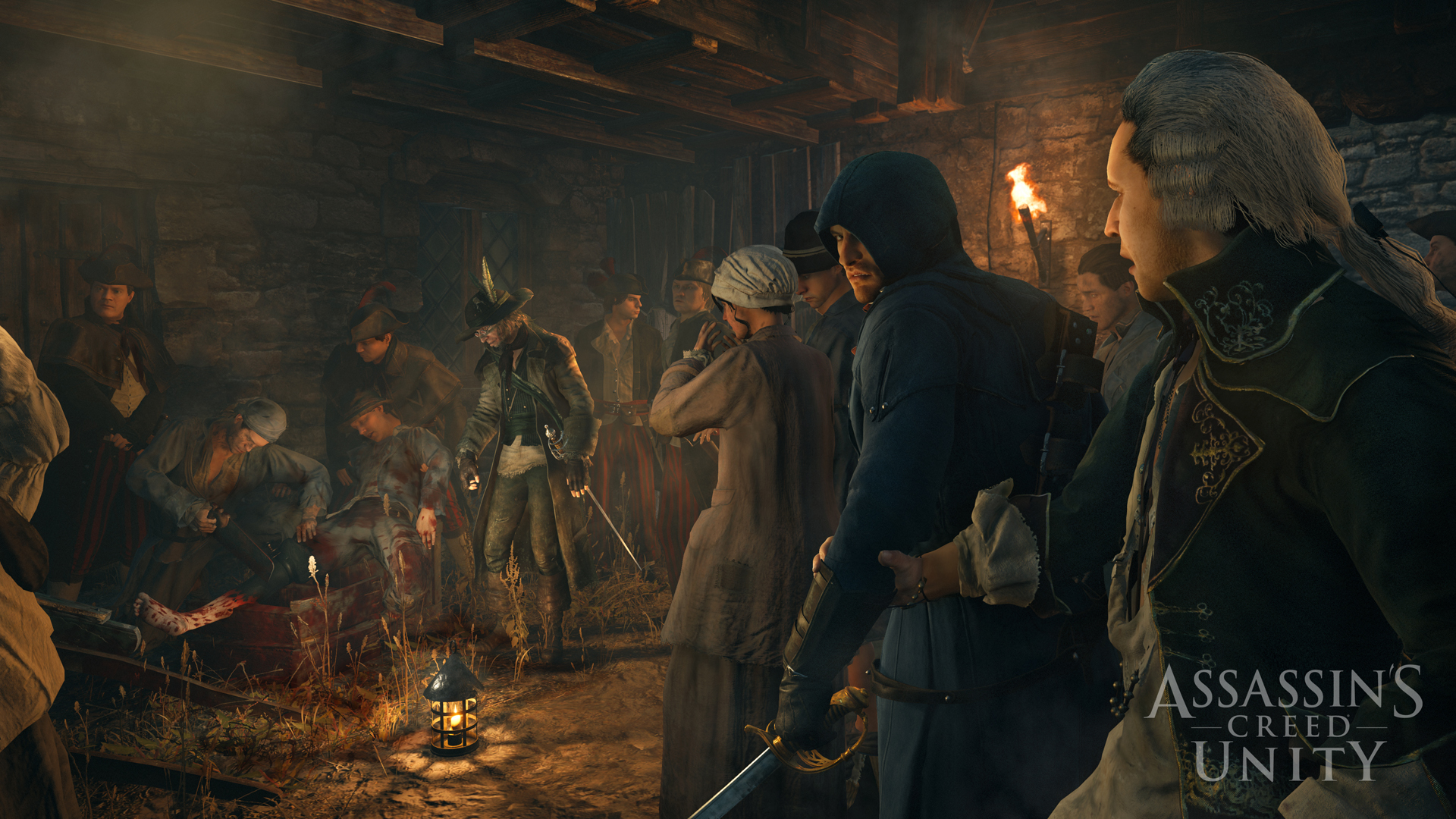 But the parkour cuts both ways. Though it's used to emphasize the setting's themes, it also keeps you separate from the most interesting elements. Life in Unity's Paris happens on the streets, not the rooftops. That's where the people are, with the graffiti, filth, and news criers. Nonetheless, the game heavily incentivizes the player to travel across its rooftops where fewer threats can get to you (especially since you can plunge through the ground upon landing). There's a sad, detached feeling that often came over me as I traveled this way, knowing that my efficiency kept me from witnessing the bustling city below. And that detachment's a microcosm of Unity's fundamental problem.

For much of the game, Unity's narrative feels divorced from the French Revolution. It's not that Arno and Elise's problems aren't engaging -- I liked them and their adventures well enough -- it's that they aren't rooted in this time and this place. Their Romeo and Juliet murder mystery dynamic could've worked in Renaissance Italy or the American Revolution as easily as 18th century France - and an eleventh hour attempt to tie into the period fails as a result. Unity spends too much time fussing with dull Assassin-Templar dynamics early on when it should have developed a consistent theme and introduced recurring historical characters. By the time the third act rolls around, it's rattling off historical figures like a crying actress in an overlong Oscar speech. Worse, the Assassin narrative upstages the much more interesting historical one -- quite literally. At one point a villain monologues while Louis XVI is guillotined in the background. The Terror largely happens off screen.

In contrast, look at Assassin's Creed II, where the inciting incident merged the in-game myth with a real historical event. Ezio's father and brother die as a part of the real-life Pazzi Conspiracy, and his campaign of vengeance takes place amidst the anti-Pazzi riots that racked the city after the attempted assassination of Lorenzo de' Medici. (If you're interested in knowing the real story, read April Blood: Florence and the Plot Against the Medici.) While there are many fictional elements tying events together, the real historical events alter and shape Ezio's character.