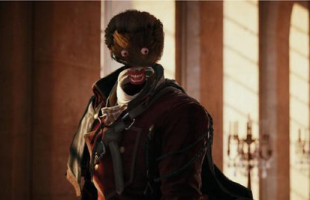 I never encountered the spectacular glitches others reported - no one's face vanished - but I did fall through the ground several times. During one chase sequence my feet sunk into the stonework like it was wet concrete. Graphics glitches pulled me out of the experience on a regular basis.

Ubisoft makes big games on short turnarounds, and considering what they deliver I'm often inclined to look past the inevitable glitches. Occasionally they're even endearing. (I'll never forget the cutscene in Black Flag where I got my mission from a talking, floating tobacco pipe.) But Unity has more than a few kinks, and gives the impression that the team rushed it and delivered it half-done.

Unity has so much going for it, and I wish they'd taken the time to polish it.

It's Crowded - And I'm Not Talking About the Streets

Open Unity's map and you'll see the problem. For a real horror show, count the options on the pause screen. This game has way too much going on. There are four kinds of treasure chests and three kinds of character upgrade points, including one I never used. Certain elements only unlock if you use companion apps or online registrations. It's unnecessarily complicated, even at a minute level.

It wouldn't matter much if treasure chests only gave you money, but they contain equipment. In fact, half the clothing and weapons can only get unlocked through specialty chests, co-op missions, or side missions you may not feel like performing. This led me to garbing Arno in a disjointed patchwork garment that made me look ridiculous. (A domino mask, leather pants and a Bourgeois coat? Tres chic monsieur!) 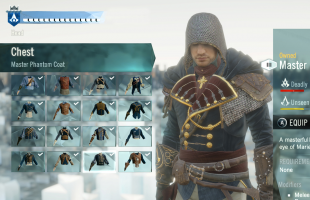 I'm a fan of the Animus Databases. They're a great way to teach history and provide deeper historical context for the games. But oh, Unity, what have you done?

The Database is fine. It functions. But the information isn't organized well and tends to wash over you, even if you know the period. The French Revolution's not straightforward the way piracy and the American Revolution are. People switched sides. Major institutions like the National Assembly sprang up, changed history, then folded overnight. Alliances and factions ruled the day. The way to teach about this period isn't to throw a lot of information at the player and let them work it out. That's unworkable. The database needed some way to create an overarching narrative for what was going on, perhaps some short essays on each phase of the Revolution. The newspapers tried to fill this role (and I loved them) but they weren't equal to the task. What the Database needed was an overhaul.

Unfortunately, instead of putting time into evolving the structure, Ubi inserted stereotypical French, Swiss and Italian jokes that add nothing. For some entries, the jest lasts as long as the historical text itself. It's smug and juvenile. I hated these. Hated them so much I almost stopped reading the database at all - and I love the database.

Did you know you have two unspent Synch Points? Go to the Character Customization Menu to level up!

Hey! Sorry to pop in and cover that Nostradamus Clue you're deciphering. But it's been fifteen minutes and you still have two Synch Points available.

You know what would really help with that fortress you're infiltrating? If you spent Synch Points! You have Synch Points and should spend Synch Points to get better infiltration abilities so you can earn more Synch Points. Oops, sorry, can you not see the guard behind this message?

Oh, you are dead.

HELLO? ARE YOU THERE?