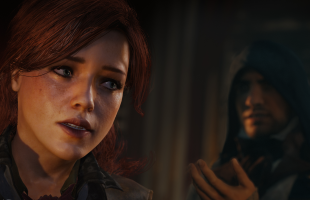 Assassin's Creed: Unity had image problems on the subject of women characters before the game even came out, so what of the actual game itself?

The good news: there are some great women in Unity. There's Elise, who has goals and a life beyond Arno. Charlotte Gouze adds some color. And there's Sophie Trenet, a Brotherhood member who seems based on feminist writer Olympe de Gouges. The meatiest role goes to the real-life Theroigne Mericourt, whose leadership of the Women's March to Versailles lets her exhibit the revolutionary fervor missing from so many other characters.

That's when we start running into trouble, though. Because while fictional women make great strides in Unity, the historical ones get pushed to the margin.

Theroigne Mericourt, for example, denied that she was even at the Women's March. The version that appears in the game appears inspired by Royalist propaganda about her rather than actual fact. Though with such great stories about her wearing plumed hats and fighting soldiers, it's understandable why Ubi opted to print the legend.

Where problems really crop up is with Charlotte Corday. It's inconceivable that Ubisoft made an Assassin's Creed game about the French Revolution where the period's most famous assassin isn't part of the narrative. Instead of factoring into the campaign, Corday's assassination of radical journalist Jean-Paul Marat gets relegated to a murder mystery side quest. While well designed and rich in detail, the mission does neither Marat nor Corday justice. Corday especially comes off badly, sounding more like an unhinged stalker than the determined, self-possessed woman we know from history. The whole thing's reductive and throwaway, and it's unfortunate.

But it's nowhere near as unfortunate as Olympe de Gouges' appearance. De Gouges was a fascinating figure in the Revolution - an activist and writer, she tackled topics like human rights, the abolition of slavery and gender inequality. Thriving in Parisian salons, she built a reputation as one of the city's foremost feminists. But in 1793 she went too far in criticizing the Jacobin faction, who guillotined her along with her Girondist allies.

And that's when we meet her in Unity, as a decapitated head.

I'm not joking. One of the heads you collect for Madame Tussaud belongs to De Gouges. It's a mission item the player picks up. Unity literally takes the period's most famous feminist and turns her into an object.
But that's not even the worst thing. In the mission, you learn that a soldier stole her head from Tussaud's workshop because he was "in love with her from afar."

So not only is she an object, she's a sexual object.

It's unfortunate and no doubt unintentional. Probably the team just wanted to fit her in somehow and didn't think about the implications. Frankly, I'd look a lot more kindly on the mission had it unlocked a database entry on her, since at least it would've opened a learning opportunity. But no, there isn't one. And I'm left wondering what the developers were thinking. 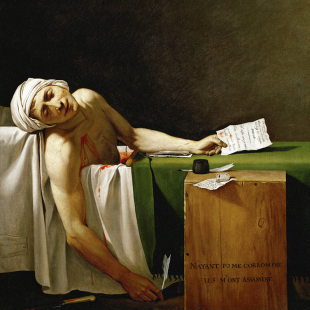 So Many Missed Opportunities

In addition to missing out on Charlotte Corday, we also missed out on Jean-Paul Marat. That's really too bad, since the fire-breathing journalist would've been a perfect fit for the game's warnings against extremism. There's no scene where players meet him hiding in the sewers or raving about enemies of the Revolution. We don't even get to see Robespierre install him in cathedrals as a secular saint after his murder.

And speaking of Robespierre, I couldn't help my disappointment at what a small role he plays in the game. He was the Revolution's most famous orator but barely has a speaking role. We barely get to see his Reign of Terror. But the most discouraging aspect was how the game treats his character arc. Robespierre's transformation from a reasonable and idealistic man into a paranoid tyrant was one of history's great twists. Handled right, it would've made a great story. Yet instead of letting that play out, we get a mission where Arno and Elise drug him so he looks insane.

That's terrible. It undercuts the story's inherent tension. What was frightening about Robespierre was that his contemporaries came to realize they'd handed power to a dictator more dangerous than Louis XVI, one that wouldn't hesitate to turn his power on them. Slipping him drugs at the Festival of the Supreme Being takes the power from the moment where his self-delusion and narcissism finally were laid bare.

It Misunderstands The Revolution's Impact

In the end, it turns out that the Templars engineered the Revolution to serve as a warning about how popular democracy leads to chaos.

If that's their master plan, it failed. While a dictator did rise after the Revolution and the monarchy returned to France (for sixteen years), the Revolution's legacy continued. The restored Bourbons inherited a constitutional monarchy not an absolute one, and their power gradually eroded until they were forced out for good in 1848. The Revolution broke royal power, and rather than deterring populist politics, it encouraged them. If anything, the game's apparent stance that the Revolution was an Entirely Bad Thing seems nearsighted and one-dimensional.

Any chance we could fix that in DLC?