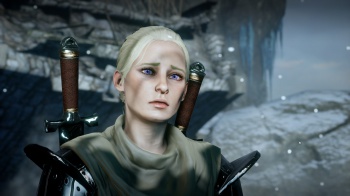 For a long time people thought medieval swords were hefty, crude instruments. This started in the 18th and 19th centuries, when swordsmen championed lighter, quicker blades as superior to their "barbaric" ancestors. Legends about swords only heroes could hold (Excalibur) and hyperbolic tales about historical figures who swung blades no normal man could lift cemented the idea of heavy, clumsy swords in the public consciousness. Early 20th century historians muddled this issue further when they repeated these early sources uncritically, and mistook ceremonial swords in museum collections - ones never intended for use in combat - as examples of 16th and 15th century weapons. Due to this, you'll still find slipshod documentaries on The History Channel (the world's most trusted source for UFO documentaries) that claim medieval swords weighed ten, twenty or even forty pounds. Finally, Hollywood and the game industry played their part too. We almost never see Medieval and Renaissance fighting styles represented onscreen, perpetuating the idea that swordfights were a hack-and-slash affair with weighty blades, rather than a specific subclass of martial art. In most games you can't even thrust - which was often the only way a sword could kill an armored man.

But this image of the heavy longsword couldn't be more wrong. Researchers who've studied medieval swords in museum collections have determined that the weight of an average longsword was between 2.5 and 3.5 pounds. Indeed, even the famous hand-and-a-half "war swords" rarely weighed more than 4.5 pounds - or about as much as a 13-inch Macbook Pro. Furthermore, arms specialists have discovered that swords intended for practical use were nimble, balanced, and easy to handle provided the holder uses them in the fighting style they were made for. Indeed, no less than Ewart Oakeshott, the 20th century's greatest historian of medieval arms and armor, argued these points extensively in his book Sword in Hand. "Such weights," he wrote, "to men who were trained to use the sword from the age of seven ... were by no means too great to be practical." Even the enormous two-handed swords carried by Swiss mercenaries during the Renaissance - often called "great swords" in RPGs - only weighed between 5-8 pounds, and some weighed just over three pounds. Their handling made up for this extra weight as well, since they were probably used in a wide-handed grip like a halberd rather than the way they're depicted in games.

Indeed, for the men that depended on these objects as a weapon of war, a heavy sword would be more of a liability than an advantage. First, it would make a swordsman slow and ponderous, easy prey for someone with a faster weapon. Second, a heavier sword adds significantly to fatigue. And finally, contrary to popular opinion, a heavier sword doesn't necessarily hold a significant damage advantage. The amount of damage a sword causes when striking is a product of its speed, angle, sharpness, striking edge, and the stance the wielder uses delivering the blow. Any one of these things (higher speed especially) could make a lighter sword perform better than a heavier one, and a heavy blade can negatively affect both speed and fighting form.

Yet game animations love to emphasize how much power it takes to swing a sword, and that isn't likely to change any time soon. Wielding a heavy weapon that cuts epic swathes through the enemy is part of the power fantasy the genre thrives on. Making a big, two-handed sword - or a longsword for that matter - look nimble and quick undercuts the constant feedback that your character is mighty and strong.

I'm hardly the first person to point out that this, though often satisfying, isn't how medieval foot soldiers - not to mention knights - used swords. Games are still stuck to the old idea that soldiers killed armored men by battering their armor in, but swords are ill suited to that role. Most swords meant to penetrate armor would do so by thrusting, since if your intention is to bash an opponent to death you're better off with a mace, flail or war hammer - something that delivers an enormous about of kinetic force to a single point. Really, if you're looking for realistic sword fighting, games aren't the place to find it.

So what, exactly keeps women from wielding a longsword? Not the weight, certainly, since most would be less than hefting a laptop. Not the awkwardness and force of the swing, since most were well-balanced and agile in trained hands. Therefore there's absolutely no reason to claim the women in Dragon Age shouldn't be able to use the weapon.

This is particularly true since the Harcourt Park World Invitational Jousting Competition's 2013 longsword champion, Samantha Swords, just happens to be a woman.

The reason women weren't using swords in the middle ages wasn't that they were unable to do so, but that they never got the training - an obstacle not present in Dragon Age.

But then again, recent scholarship increasingly finds that medieval women were no strangers to the battlefield.