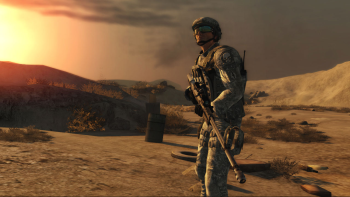 Don't Make It A Shooter
All of the games made, or currently being made, about the Cartel War are shooters. Now there's nothing wrong with shooters, but when you make a game where the primary mode of interacting with the environment is through high-velocity ammunition, it severely limits the kind of story you're able to tell. How would a developer portray the uncertainty that accompanies the violence, the nervous moment when you're stopped by a cop and don't know if he's dirty, if he's clean, or if he's a narco wearing a patrolman's uniform? How could a shooter show the societal breakdown that's occurring in some of the worst affected cities, like Juárez? RPG mechanics, on the other hand, would give a player the opportunity to explore the world and speak to characters, while stealth mechanics could emphasize the danger faced by people living under the threat of assassination. A game of this type would wind up looking more like LA Noire, Beyond Good and Evil or Splinter Cell, with its mechanics focused on collecting information and staying alive rather than killing. Another option would be to place the player in a strategy or resource management role a la Sim City or the Total War series, perhaps taking on the role of a federal police commander trying to keep order in a city with limited resources, while discovering and purging corrupt officers. Even something oddball like a sports game could work, casting the player as a boxer or MMA fighter under pressure by narco gamblers that don't like to lose. Centering the story on the Cartel War's victims like this would be a powerful way to humanize the conflict.

Taking away the player's gun, or at least limiting its use, would also go toward solving the problem of glorification. Though the Cartel War is full of horrors, it has its glamour too. The war has its own genre of music, the narcocorrido, that celebrates famous gangsters. Telenovelas like Munecas de la Mafia and La Reina del Sur feature sagas about trafficking families or Mafia wives. Narcos appear in tabloid magazines, snapped in glossy relief with their mistresses, and when the gangsters die, inevitably by violence, they're buried in huge modernist mausoleums. To the large numbers of working poor, the narco fantasy of limitless cash, hot women, and empowerment through gold-plated guns has become a recruiting tool for traffickers, and there's a real problem of kids aspiring to the narco lifestyle. Narco culture doesn't need the help of games, and frankly, we shouldn't give it to them. Once again, Call of Juarez got this backward, as it had the player participate in beating information out of suspects, choking prostitutes, and at one point threatening to hang a man-torture tactics used by cartels and, at times, Mexican military and law enforcement. Instead of providing some sort of commentary on the relationship between cops and criminals, or creating moral grey areas for the player, these scenes just served to normalize the human rights abuses that take place on a regular basis.

Avoid Easy Answers
The Cartel War isn't happening because of the United States' appetite for drugs, loose gun laws, or institution of the North American Free Trade Agreement. Likewise, it isn't happening because of Mexico's corruption problem, its endemic poverty, or (as President Calderon contends) the breakdown of the traditional family. Nor is the violence the fault of Central America's porous borders, or even the massive amounts of cocaine produced in Colombia. In fact, it's the fault of all these things. Tragedies this big don't happen for a single reason, but for a whole collection of reasons, and if anyone tells you there's a silver bullet solution, they thoroughly misunderstand the problem.

Something about the Cartel War makes people preachy. When we talk about it, we tend to say "If we only ..." a lot, and reach for an easy answer like marijuana legalization, gun control, or tighter borders. Unfortunately, the country's drug trafficking organizations are far too dynamic and nimble to crumble because of a policy change or legislative crackdown. They can always diversify into other illicit trades, source their guns from Latin America, and develop their domestic drug market and European distribution network. Any solution-if there is any-is going to be a multi-tiered effort by the U.S., Mexico, and Columbia to fight cartel networks in their respective countries, paired with major institutional reform and economic development initiatives within Mexico that allow people to earn livable incomes. Even then, "winning" the conflict won't mean that the cartels are dismantled and nonexistent; it's more likely the violence will simply decline to acceptable levels when the remaining cartels form a lasting pact or one cartel gains majority control of the country, negating the struggle for smuggling routes.

Mexico Is More Than Massacres
Last May, police found 49 corpses dumped on a road outside Monterrey with their heads, hands, and feet removed. Monterrey hadn't seen that type of body count since the previous August, when Los Zetas gunmen stormed a casino, doused the exits with gasoline, and burned the building down, killing 52 people. The stories go on-a car bomb in Juárez, a town mayor stoned to death in Michoacán, kidnappings and body dumps-a journalist here, a police officer there. These are terror tactics the cartels learned from Al Qaeda, calculated brutality used as a message of power projection to keep their enemies, the government, the people, and foreigners, in fear.

Each of these events is true, but they paint a distorted picture. In the U.S. and Europe this spectacular butchery shapes our image of Mexico, and it's tempting for developers to create an untrue, alternate reality where Mexico is a hellscape devoid of culture and everyday life. The full picture isn't as bleak as that: Drug violence is down significantly in 2012-in some cities like Juárez, the decline is as much as 50% compared to last year. It's also important to note that drug violence tends to occur close to the U.S. and Guatemalan borders, leaving many areas of the country fairly safe.

Added to the reduction in violence, Mexico's economy weathered the recession fairly well and the Peso remains strong, with a low inflation rate. The middle class is growing and foreign firms continue to invest in the country, leading to modest economic growth. Arts and culture are alive: Vibrant film and music industries still exist, and Mexican directors have turned out some excellent movies in the past few years, ranging from historical epics to the incisive, Cohen-esqe drug war satire El Infierno. In the political sphere, the country elected a new president on July 1st, showing that democracy still functions. Mexico is still a country with vast challenges, make no mistake, but there are also people who live normal lives as the hurricane whirls around them. Kids still play soccer in the afternoons, friends gossip about new boyfriends over drinks, old women still count rosary beads, and gamers ... well, gamers still game.

And that's the point, really. The Cartel War is an albatross around the country's neck, but the Cartel War doesn't define Mexico. As games increasingly seek to explore the internal strife raging south of the U.S. border, I hope that they choose to do so in a way that highlights rather than reduces the complexities, that proves there's more to the country than kidnappings and narcotics slayings, and that holds out hope that Los Estados Unidos Mexicanos is ultimately too strong be held captive by murderers.

Robert Rath is a freelance writer, novelist, and researcher based in Austin, Texas. You can follow his exploits at RobWritesPulp.com or on Twitter at @RobWritesPulp. Have questions about this topic? Tweet them to: @Crit_Int